The first thing I think of when I think of hip-hop is the beats whether they’re from Exile, J Dilla, Lex Luger, or more recently Tyler, The Creator. Then I move to the lyrics that come from the mouths of Shad, Blu, Fashawn, Intuition, Wax and Childish Gambino. Another feature of hip-hop is the movement of “branding” or “promoting” clothing companies and catch phrases.

Style and hip-hop have coexisted for the majority of hip-hop’s lifespan with Run D.M.C. rocking “their Adidas”, Wale rocking his “Nike boots”, Tyga bringing the “snapback back” (regardless of the fact the Cool Kids did it first), and Tyler, The Creator rocking his “Supreme box logos”. Hip-hop has been the main reason for a lot of clothing companies gaining a large fanbase recently. I personally used to sag my pants, rock the lastest shoe craze, and wear hip-hop apparrel such as Rocawear when I was in elementary school. That’s a bad look now for the most part as styles have changed.

Long story short, Fashionably-Early has extended it’s reach into the world of clothing and is willing to bring you, the reader, closer to brands that you may not have heard of but deserve your attention.

I recently got to speak with the owner of Loyal KNG, a clothing company that is set on backing the hip-hop culture and doesn’t mind throwing some pop culture references into their designs.

Read the interview after the jump

Valley All Day: To most, Loyal KNG is an unknown brand. Tell us a bit about Loyal KNG and what you guys are trying to accomplish.

Trung Vuong: Loyal K.N.G. is a love note to culture and all those things that we grew up around that influenced and inspired us to be the person we are today. Culture is knowledge and it is everywhere around us, hence the meaning of our K.N.G. acronym being “knowledge never goes”.

Loyal K.N.G provided an environment for the team to be productive and creative in a cohesive manner. Whether it’s designing, blogging, music-making, or video-editing, we were all doing it under one umbrella, Loyal K.N.G. Sometime the biggest push for someone to grow creatively is to have a reason to do so. Loyal K.N.G. became our reason to create. It’s quite an amazing thing.

VAD: Where is the brand based out of?

TV: Loyal K.N.G. is based out of a moderately small town in Texas called Longview. However we station most of the brand’s activity in Dallas, TX, which definitely makes that our home. We have a large support from Dallas, and Loyal K.N.G. wouldn’t exist without their love and support for our brand.

VAD:  A lot of people now seem to look on Twitter for new and underground brands and these brands look on Twitter due to free advertisement. How much do you embrace Twitter as a main promoting tool?

TV: Twitter, besides our blog, is definitely one of the most powerful networking arsenals we have at our disposal. The ability to shout out our thoughts, activities, and updates to our supporters for an immediate response is priceless, and the fact Twitter’s a free tool to use makes it all the better. What’s important to us about the way we use Twitter, is not so much as to promote the product but more so a showcasing of who we are as folks behind the brand.  We get to show the world that we’re much more than kids designing tees, but that we’re brothers, friends, hard-workers, and dream-chasers.

Twitter is a great tool, and it plays a large role in the way we build our brand and create awareness.

VAD: Loyal KNG has some very original designs. I’ve seen Casper wearing a DOOM mask, Dirk pulling off the jumpman pose, Godzilla chilling with his clique, and Daft Punk riding Bullet Bill. The designs are very different. How do you come up with such original designs?

TV: When we set out to design a tee, we weave a story through our art so that the folks, who are in the know, know the ideas and catch the meaning. It’s our way of pushing out all those things we love, whether its music, comic books, games, and movies, onto shirts and just having fun with it. We’re truly promoting culture through our brand, and some time ideas just come to us because we’re crazy kids with sparks going through our brains. But on a serious note, good ideas are hard to come by, and if we release a design, then we put a lot of time to think it up and execute it the way we want the world to view it. It’s a great advantage that we do all our designing in-house, so the work comes out purely from the creators, versus a design that was just purchased from a freelance artist to fill up a season. We always have a core concept that we focus on in each of our seasons, and we build our ideas off of that.

For me personally, there were things I wanted to see happen on t-shirts that NO brands were touching or doing. And I just adored so many things and wanted to see it come back in a fresh and witty way, so this led way to me creating designs the way I wanted to see created. It was just a matter of providing the game something it never had or even considered having. The team and I branched out and had fun doing what we loved and it led to a bunch of fun, witty, and classic designs.

VAD: You currently have a few products that are listed as “Sold Out Forever” on your site. Do you ever see these products making a limited time comeback for those who missed out on them before?

TV: “Sold Out Forever” means exactly that, it’s gone forever. I don’t like to reprint designs due to the fact that I want to drop newer designs and focus less on having to push older designs into the fray. It just means that if our supporters want a tee, then it’s important to grab it up before it’s sold out forever. If I ever consider reprinting an old design, then it’ll be redesigned in a different form than the original. I do this so that folks who own the first edition of the designs will have the original, and nobody else will have it ever.

Sadly, there are designs that are “Sold Out Forever” that I don’t own in my own personal collection, and even I feel a bit of remorse for not saving myself a tee.

VAD: Going back to the designs, the brand seems to have a bit of a “mascot” in a character named Atama. This weird little guy is on a decent number of your shirts, sweaters and hoodies. Does Loyal KNG think of him as a “mascot”? Is there any symbolism with him or is it just purely a design?

TV: Atama is our official Loyal K.N.G. mascot. He’s name comes from the Japanese word for “head”. Atama symbolizes rebellious intelligence. This is the way we approach all projects and endeavors presented by Loyal K.N.G. and life. There’s a definite series of symbolism found in our mascot, Atama. First off, Atama’s a boy who is wearing a brain helmet, which symbolizes intelligence, while the cross-bones, eye-patch, and tooth-pick depict his rebellious pirate-esque characteristics.

Atama idealizes our unconventional approach to our art-work, branding, and projects. We focus on thinking outside of the box and breaking out of the grasps of conformity. Because when things are moved from the status quo, changes will be found, and whether that’s a good or bad thing, it’s all progress.

VAD:  As of right now Loyal KNG isn’t a household name. Are there any moves being made to make it a much more accessible brand? Any plans to start selling to retailers like Karmaloop?

TV: We are currently in control of all sales in-house and are not sold at retail, boutiques or online retailers. We are trying our best to garner attention to our story as a brand and want our supporters to connect with us in a personal way when they rock our apparel. It’s a hard path to follow, especially for an unknown brand, but if it’s a difficult path, then it’s the right path. It’s either that or we’re crazy. Possibly the latter

Although we are not in any boutique at the moment, we will probably look into working exclusively with a few respected boutiques that we feel will be a great fit for our brand to be presented by.

I’m a pretty heavy shopper and I always look for quality products when it comes to my clothes. Loyal KNG is a company that produces quality apparel and has the designs that stick out. There are few clothing companies that line up their designs with multiple pop culture references to make a seamless transition into a full fledged piece of art. Casper wearing a DOOM mask is completely genius because you know that in the grand scheme of the street wear clothing industry, no other company is doing that.

If you want to check out their stuff and are looking to support this independant and original company go to their website, LoyalKNG.com.

Below are just a few of the designs Loyal KNG has to offer: 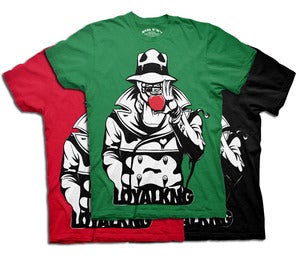 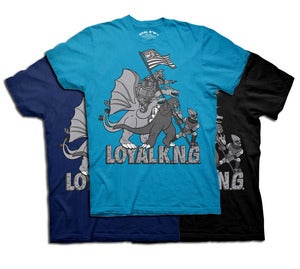