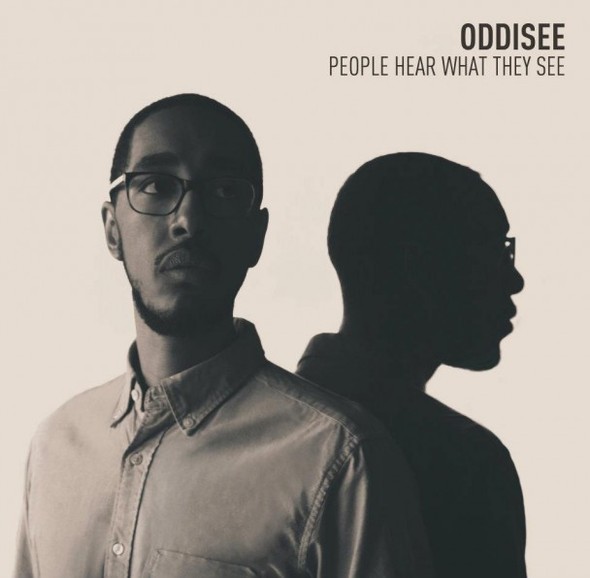 Oddisee’s new album People Hear What They See drops June 12th, but Oddisee gave Spin the go to stream his whole album.  Check out this dope write up from them and listen to the album below. Don’t forget to pre order!

“I’m not a star, somebody lied / I ride the subway as a car, I’m getting by.” That’s Oddisee on “Do It All,” the collaborative track with his DC supergroup Diamond District, from his new album,People Hear What They See. The producer/rapper just kind of throws that line out there, subtly grounding Rick Ross’ hammy modesty with a gentlemanly dose of honesty. This is but one ofPeople Hear What They See‘s many thoughtful takes on rap’s rote subjects. If there’s a concept to the album, it would be approaching the entry-level boasts and well, bullshit of rap, and turning them into true, lived-in representations of everyday life. “American Greed” is the “get money” song with a widescreen worldview of risk and reward, and “You Know Who You Are,” is a track for “the haters” twisted into a celebration of those who’ve supported you, and a request for introspection. These are mindful contributions to a shifting hip-hop dialogue from a doggedly underground dude not too interested in being superstar, yet well aware of the frustrating limitations and walls put up by the underground, as well.

I’m focusing on lyrics a bit here because everyone’s well-aware of Oddisee’s production chops, right? At least, they should be. Oddisee is the type of guy for whom tags like “underrated” and “slept on” have been applied so much that I’m not sure he’s even underrated anymore. One of the most impressive runs in rap as of late is Diamond District’s 2009 album In The Ruff, a nostalgic rush through New York rap with a dose of go-go swing and loose, live instrumentation; last year’s Rock Creek Park, a mostly instrumental memory stroll via old soul samples; and nowPeople Hear What They See, a gritty hip-hop album with detours into orchestrated soul, quiet storm, and space disco. Last year, Oddisee put out a challenging Twitter rant on what’s wrong with being called “underrated”: “Reserve underrated for artists who can’t catch a break but should. Not for the successful ones you want to see bigger.” What excited fans are grasping at when they call him “underrated” though, is just a sense that Oddisee is an ambitious and singular talent who’s hard to pin down and probably suffers a bit for that. You can hear that same, invigorating sense of “is this even rap anymore?” that you hear on Kanye’s My Beautiful Dark Twisted Fantasy and El-P’s Cancer For Cure, though Oddisee’s far more restrained than either of those producer auteurs. People Hear What They See is available on iTunes on June 5, and everywhere else on June 12, but you can stream it below right now, exclusively at SPIN.