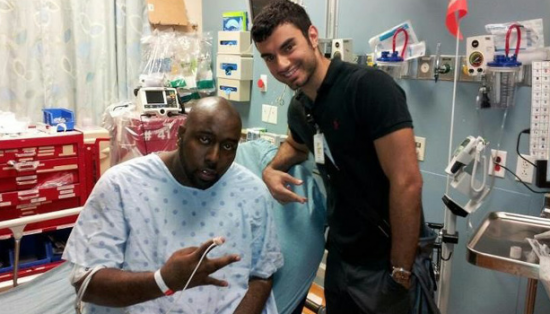 If you aren’t aware of what happened, click here.  I gotta get to the gym, but here’s a response from Trae The Truth about the shooting. Props to XXL.

“I’m not sure exactly what the altercation was necessarily about, but long story short, whatever transpired, they ran in my direction, so in the process of running in my direction, that kind of had everybody in the open. So as the altercation came my way, shots were being dispersed, but since it was coming our direction, it was a crowd of people. Everybody was wrong place, wrong time.”

“As far as my condition, I’m in the healing process, tryin’ to figure out how to get this bullet removed. The bullet’s still in my shoulder. They changing bandages now and it’s still bleeding.”

“My brother, who got killed on Thanksgiving, Clip, his nephew was killed. And one of my peoples, an upcoming rapper from Houston, Cal Wayne, one of his people got killed, too. She was amongst the innocent bystanders. And then I was shot and somebody else was shot. It was just crazy, man.”

“The crazy thing is, homicide took me directly from the hospital. They weren’t really thinkin’ about what people was going through. It’s always negativity when you come in and you somebody in my stature, so they feel like it’s something extra going on, when all the while, the situation ain’t have nothin’ to do with what we had goin’ on. We was doing a concert, leaving the club.”

“I watched the news out here yesterday, and people was comin’ out the woodworks with all this, ‘This ’cause of hip-hop’. Muthafuckas don’t even know the situation. I was an innocent goddam bystander. People always make shit more than what it is. That’s why I haven’t talk to nobody [in the media] about the shit. I had news people showing up at my doorstep.”

I don’t even entertain that negative shit. I been in the negative life so long, I’m trying to move forward. The bad things are having to watch those who were killed, who got kids, having to deal with that. That’s a real fucked up thing.”

“At the same time, I have received a lot of support throughout the industry. Immediately. Yo Gotti called me when I was in the hospital. Trey Songz hit me. Rick Ross hit me. 2 Chainz, Big Sean, Lupe. Really, 98 percent of the industry called me already and been real supportive, let me know, if I need anything [they were there]. Of course Tip been real supportive, that’s my brother. A lot of people been checking on me and seeing what’s needed.”

“I’m not even really worried about me. My heart goes out to the kids that got to deal with losing. Of course, it’s always a painful thing for us to experience it, but it’s even harder on a kid. My youngest son, Houston, when he got to see me for the first time afterwards, he’s seeing his father with slings and bandages and blood comin’ out of him. That type of stuff make kids go hysterical. They not used to it. I had to sit down and explain it to him.”