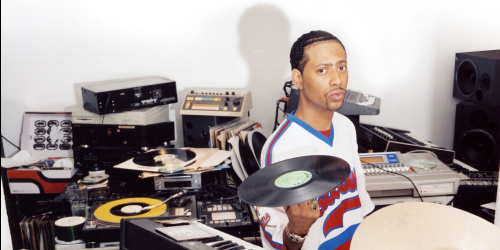 Hello, I’m Trixx, the erector of this quite fine blog if I don’t say so myself. Well today, I’m here to bring you something different. I’m an aspiring journalist and writer with a monkey constantly dwindling on my back whispering in my ear to do more freelance writing. With my blog it’s like having a pad open in front of me all of the time but when I’m finished, as long as I publish this, people will read it. I’m going to write whenever I get the spare time and I’d like to start it off with a topic very dear to me.

All underground heads have a built up anger of some sort of the state of the art that they love. Personally, I wasn’t a primary source on what exactly went down but it’s not a hard puzzle to put together. Hip hop started with shape shifters like Grandmaster Flash, DJ Kool Herc and Melle Mel among others. A staple of hip hop production became breaks and loops that were often topped off with some scratching. But most producers would say the biggest part of producing a hip hop record is the cutting up of the samples. Hip hop was meant to sound gritty and dirty. The sound reflected the backgrounds of most of the artists making the music. Hip hop started in the underground, in the streets as the rappers would say. It wasn’t on Television or any of that mainstream media because the sound wasn’t supposed to be reminiscent of pop music. It wasn’t supposed to be extremely catchy but people began to accept it pretty easily. I can’t really tell you if it was because people were truly just a lot more accepting and willing to test things out before judging back then but that probably was the case. But at the time when hip hop was just coming up, many of the people that were hearing the new sound on their local corner were able to relate. Hip hop found it’s first fans in those people living in tough living conditions, the slums and all that. It was music for the lower class. It wasn’t even the lyrics that screamed out their struggles. The black people that related to the sound were all formerly big fans of forms of funk music. That’s where a big sound of hip hop came from. The majority of samples come from that genre. It was a combination of that sound with a dirtier, street related sound.

Kids of the 70s still shared a quality of the kids of today. They were attracted to the rebellious things. Risks and danger had an unmatchable pull towards many teens. When kids from suburbs and nicer areas started to hear the gritty sound of this new genre, some latched on to what was being heard I don’t even have a pure explanation why. My best reasoning is that the music was far from the norm. I’m sure that most parents weren’t approving of this new hip hop thing simply because it was a black culture thing. So that’s what got many rebellious white kids onto the movement. Soon enough, all races caught on and it did finally start to hit the media hard. The Sugarhill Gang’s “Rapper’s Delight” was the first hip hop song to make the charts. It contained just enough catchiness in it’s sound for people of all backgrounds to tune in. It was just something about the music that would automatically force your head to bob in an up and down motion to the beat. So with all these new fans tuning in and all these other up and coming artists, a genre was truly born. I want to focus more so on the fall from here but have you know that I’m leaving out the biggest chapter of the hip hop history book here. The late Old School era and the famous Golden Era.

The first step in the fall of hip hop was the emergence of gangsta rap. Okay, gangsta isn’t bad at all but it opened up a whole new realm. Some of the music lost some quality but it wasn’t bad. The lyrical substance was arguably stronger than ever in gangsta rap and even some of the beats were omnipotent. But when I say it opened up a new realm, it made more people feel like they could rap. A lot of gangsta rappers had simpler flows than that of legends like Q-Tip and Rakim. Many people started to think “Hey this rapping thing isn’t as hard as I thought”. And this whole thing led to what many would call the “Bling” era. Making the most bucks became more important than making the best music. Many of the up and comers who would try to step into the game were in it only for the money. This led to, when an artist would go in the studio to make the next song, he became more focused on making the song that everyone else would like and buy rather than making the track that he would like the most, the track the took the most effort for him to make that when he laid down in bed to go to sleep, he could feel a sense of true accomplishment. And when these wack tracks began hitting airwaves and taking up the mainstream, everyone earned the credence that they could also be a rapper. And you know what, it was totally possible for most people to be just as good of a rapper as some of these guys. Take a look at Soulja Boy, I bet you that 99.9% of the United States could rap just as he does. But now when I hear a guy like Tonedeff rap extremely fast with intense, stipulating lyrics, I know for a fact that very few people could do that. The talent had been taken out of hip hop. Talent is defined by either doing something that very few can do or by doing something better than everyone else. If my dad was given a beat by Lex Luger and he rapped over it, it would be just as good if not better than a Waka Flocka Flame song. My dad doesn’t enjoy hip hop very much so he has never heard it and he can’t rap. But look at what he could do. I’m only expressing one part of the problem here also. Production values have totally changed in the mainstream. It’s not about the best beat, it’s about the catchiest beat. Producing a mainstream hip hop hit still takes more skill than being like Waka Flocka Flame but it’s not hip hop. The boom bap sound was totally taken away. It was no longer about nodding your head to the beat. The essence of hip hop had been taken ripped apart and brutally massacred forcing it to go into hiding.

I’m going to keep pointing out the flaws of the mainstream. Let’s take a look at 2 Chainz’ current hit with Drake titled “No Lie”

Firstly, I’d like to point out 2 Chainz’ first verse. That’s what rap has become. Line after line. It’s no longer a verse. Rap has become line followed by another line. Also, I can’t name you the most recent song in the mainstream that has told a story. It’s all about “Money, nigga” “Bitches, nigga”. That shit has no fucking substance and it is to my bewilderment as to how it’s so fucking popular. Somehow hip hop is now for the rich. That’s what they rap about. They rap solely about money and women. Wanna know what I hate the most about mainstream rap now? Every single fucking song has that same fucking fake ass snare drum at a high bpm (Beats per minute). 0:34 of the 2 Chainz video has it. And that makes every drum pattern sound so god damn similar.

I’m going to strictly look at the lyrics. The first song, every other line is some immature punchline relating to “bitches”. “Bitch you ain’t a boss ’til you cut a fuckin’ paycheck, Only thing between me and your bitch is a latex”. Now the second song is a documentation of the artist clinging to girls but eventually failing at love. “So, “End it while we’re still friends” is what I suggested and she replied “I was hoping that you would get the message” is just one of the lines from the track. Personally, I look towards relatable music. Sure, some of these rappers are getting plenty of pussy and money, that’s fine but NONE of their fans can relate to what their saying. Nearly everyone can relate to a song describing constant heartbreak. One song about how great their life is would be perfectly fine but EVERY song is about how great their life is. You know what’s the worst part? Because of what these rappers say, everyone who is an aspiring wack rapper says it too. For example, I know a few aspiring rappers that I went to school with. Are they fucking pussy magnets like these rappers? No. Do they make a lot of money? No. Do they travel often? No. So then why are they rapping about that shit??

Before I wrap this up, I want to point out why hip hop isn’t actually dead to everyone. When that new movement of gangsta rap and bling rap slowly started to tarnish the hip hop game, a new tangent began to form. The kids who grew up in the golden era were here to keep that music that they grew up with around. Hip hop was being split into two. Similar to a railroad switch. There were two paths being taken but that train had to decide which one to follow. It couldn’t take both. It was one or the other. The train represents the modern day radio and subsequently, the public. One radios began spinning all of this stuff with less substance, people who haven’t heard better started to cling to it. Those who grew up in the 80’s were sent good hip hop. They didn’t have to go a dig for it, it was always being marketed to them. Then that switch occurred and now the good music was either old or it fell underground. The people that grew up in the golden era kept it alive, those are the underground rappers that we know of today, the second generation of the golden era except they have been shunned. It takes a person with an ambition to seek out music to find the underground. I’m sure if this real hip hip that lives in the underground today was still played on the radio, it wouldn’t be underground and it would have so many more fans. There are just so many people that don’t do their own musical digging. They let the musical tastes of others also be the musical taste of their own.

Thanks for reading, this was a bit of a jumbled mess of ideas and rants but I just wanted to get a point across. I promise the next one will be a little easier to follow. Plus, my apologies to some of you for that lesson in hip hop that you’ve heard so many times.