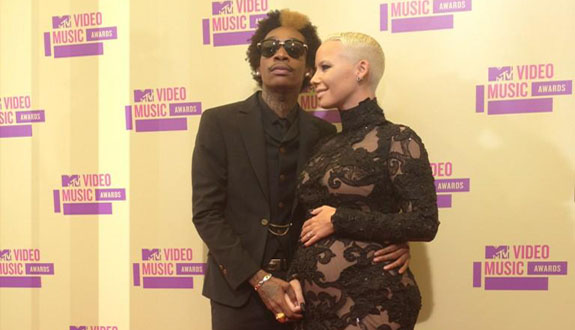 Wiz Khalifa has been denying the persistent rumors that his fiancée Amber Rose is pregnant, but turns out the couple was just saving the official announcement for the red carpet at the 2012 MTV Video Music Awards. Wonder if Beyonce knew the kind of trend she was starting with her 2011 belly rub?

Amber Rose accompanied Wiz Khalifa down the red carpet for Thursday night’s award show, wearing a skintight lace and mesh black dress, which clearly showed off her growing baby bump. And, of course, she did the belly rub just to make it official.

This comes after weeks of Rose being photographed out and about sporting her engagement ring and a baby bump, but with her fitted VMA outfit there was finally no denying it.

Last month, Khalifa addressed the pregnancy in an interview with Philadelphia’s Hot 107.9, saying that he definitely wants kids but it wasn’t quite time yet. “She will have my baby in life,” he said. “And you will know when she’s pregnant. But it’s not the time now for people to start going crazy.”