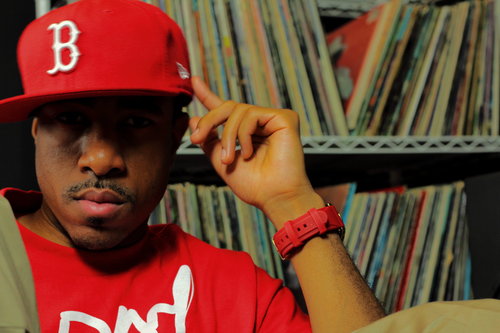 We’ve been picking up steam with the amount of interviews we’ve been doing and the next one comes from an artist that we’ve created a really good relationship with over the past month or so. Mega Trife is dropping his new album with producer Nonsense Full Circle on November 27th. Before the album drops, get to know a little bit about the emcee himself.

First off, tell the readers who Mega Trife is

Mega Trife is equal parts hip-hop aficionado, Boston sports fan, and movie buff. It’s 2012 and I still love hearing that boom bap hip-hop that gets the head bobbing at breakneck speeds but when I’m not doing that I’m wreaking havoc in all of my fantasy football leagues or just catching whatever sporting event is on TV that night and watching Tarantino flicks in the background. Oh and sometimes I rap too.

Who was your biggest musical influence growing up?

Honestly I didn’t get into hip-hop until later on, growing up all I really knew for music was what my parents listened to in the car. That was usually the oldies station so my first musical loves ranged from guys like Marvin Gaye and The Temptations all the way to The Beatles and Elton John. I was a huge Beatles fan as a kid. As I got into elementary school I started to pick up more of the alternative and grunge sound that was going on in the early 90’s and even some metal. I loved Guns ‘N’ Roses, Nirvana, Pearl Jam, etc. When I say I didn’t get into hip-hop until later I mean of course I loved Snoop and Dre like everyone else. The whole G-Funk era, Onyx, Biggie and other acts that were commercially successful at the time. But what some might label underground or real hip-hop I didn’t really get into until high school when I really started bumpin Boot Camp Clik. Lots of Smif-N-Wessun, lot of Mobb Deep, and a lot of Keith Murray and Def Squad. Musically I was influenced by all of these genres and artists.

Who’s your favorite non-hip hop act at the moment?

Not only is John Mayer my favorite non hip-hop act right now, he might be my favorite musician currently in any genre. i was actually a fan of John Mayer right from the very beginning off of his ‘Room For Squares’ LP before he was the star he is now. I just remember brushing my teeth one day and I heard a song coming from the TV and their was a guitar solo that just caught me. Guitar has always been my favorite instrument and I actually bought one recently and am learning how to play. But off the strength of that solo I had to look more into him and once I did I just became a fan instantly. I would tell most of my friends hey, you gotta check this guy out and they would actually clown me and say I was soft. But even with all the different kinds of music that I love it was the hip-hop side of me that loved JM’s guitar work because I love guitar based samples (i.e. Common’s ‘Invocation’). Next thing you know Kanye is gettin down with him, Common gets down, The Roots get down, even Dave Chappelle became a fan. Then all of a sudden my friends say hey…this guy’s not so bad!

What producer would you like to work with the most?

Well its funny because there are a lot of producers I could name here and most of them I actually will be working with on my next album. Statik Selektah, Ski, and Khrysis are just a few of those names. Another cat is Rashid Hadee who is a DOPE producer/MC from Chi-Town and King Midas who is the producer for the Houston collective H.I.S.D. Any fans of Tribe, Little Brother, Gang Starr or Pete Rock & CL would love both H.I.S.D. and Hadee so check them out. But man there’s so many to choose from it’s hard to name just one but if I had to even though I feel every MC says this, how could I not say DJ Premier?

I’m always one to ask random ass questions so, ass or tits?

Awesome question. This might get me into some trouble but…I’m a breast man. Don’t get me wrong I love a nice ass as much as the next man but some nice breasts is just like….well I’ll be damned! Basically if you had two tens, and one had an ass and no chest and one had a chest and no ass…I’m going with the Dolly Partons everytime. At this time I’d like to give a shout out to Kandee Lixxx…

Favorite TV show as a kid?

Well as a really young kid I was all about them Ninja Turtles and the Roadrunner & Coyote cartoons which are still funny might I add. But I’d have to say Fresh Prince was hands down my favorite show from the 90s. Reruns still come on at midnight on ABC Family and you best believe I watch both episodes.

I’ma just answer right off and say that I generally refer to Pete Rock as my favorite producer of all time. Soul Survivor has been my favorite album for years and I just love that soulful sound that I feel he brings to hip-hop a little more often than Preem does. However, the answer to this question is subject to change at any moment depending on my mood. I love M.O.P. and Sean Price just as much as I love Tribe and Jay Dee (or Dilla as most people refer to him by), but when I’m in a M.O.P. kinda mood I’m not gonna wanna hear ‘Electric Relaxation’ and when I’m in a Tribe kinda mood I’m not gonna wanna hear ‘Breakin’ The Rules’. Sometimes I just be in that Premo zone where I’m like man this guy is the best! Then I listen to Pete Rock the next day and say nah THIS guy is the best. Bottom line is if either one of those guys produced your whole album, it’s YOUR fault if it doesn’t become a classic.

What’s your favorite record label at the moment?

I’ve always been a fan of Duck Down and the fact that they’ve survived and are still relevant in their genre through all the changes that the industry has seen over the past fifteen years I think says a lot. Plus they are even expanding and taking on other acts aside from just being ‘Boot Camp’s label’. I think Pharoahe Monch signing with Duck Down was a great move for both. I also really like the music Stones Throw puts out. Why they haven’t signed Blu yet I’m not sure. It’s so different with labels now though because back in the day I could have told you everyone that was on Loud, that GZA was with Geffen, Common and M.O.P. had deals with Relativity and so forth. But honestly, after Rawkus folded I kind of stopped paying attention to what labels were signing what acts and putting out what albums. Last year one of my favorite albums was Phonte’s ‘Charity Starts at Home’. Shamefully I can’t even tell you what label that was released on.

What can we expect from the new album with producer Nonsense?

If you’re a fan of DJ Premier, Pete Rock, Dilla or Little Brother, you’ll be a fan of us. From ‘Full Circle’ you can expect a complete hip-hop album from start to finish. No filler, no token radio friendly songs, nothing that wasn’t carefully crafted to be specifically included in the context of the album. Although this is the first people are really hearing from us, Nonsense and I have already released an album together called ‘Proof of Life’ back in 2010 and I recorded a solo project that was never released. Nonsense’s beats speak for themselves and I truly find this to be my most potent work to date lyrically as it is a culmination of a wide range of life experiences within the past four years condensed into 16 songs. Nonsense and I always seem to bring the best out of each other musically so as fun and natural as these two projects ultimately came together it is also something neither of us are interested in rushing. The album has M.O.P., Termanology, Blu, Von Pea, and Nature all making guest appearances. You’ll be able to download ‘Full Circle’ from megatrifeandnonsense.bandcamp.com for free on November 27th and ‘Proof of Life’ can be purchased there now. Check for videos off of ‘Full Circle’ at www.youtube.com/mtrife. Thanks for the interview guys, peace!