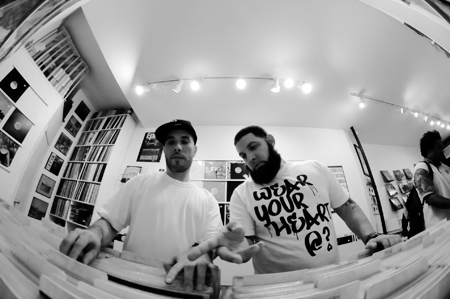 n 1998, when Constant Deviants were fresh on the scene, the duo released “Can’t Stop,” an ode to hip-hop that put the duo of M.I. and DJ Cutt on the map. The single served as the foundation for Constant Deviants’ now loyal fan base, a swarm of supporters that eventually led Constant Deviants to form their own label, SIX2SIX Records.

Now, 14 years later and with their latest album DIAMOND scheduled for release this fall, Constant Deviants are revisiting the track with a sequel, of sorts, fittingly titled “Won’t Stop.” “The song is a letter to hip-hop,” explains M.I., “and since it’s Part 2 of the record we put out in ’98, the point was to capture the feeling of NYC in 2012.” Musically, they strike a perfect balance between the two eras, with DJ Cutt’s crackling, soulful chops and driving drums, and M.I. at his most earnest – and strongest lyrically – recounting the story of how he fell in love with the music he wound up dedicating his life to.The video, directed by Jimmy Powell and IHenry, captures much of the same classic feel, with shots of M.I. and Cutt making their way across the Brooklyn Bridge and around New York City.

M.I – Nothing You Can Do (Ft. Chamillionaire & Corbett) [Prod by Tyler Keyes]