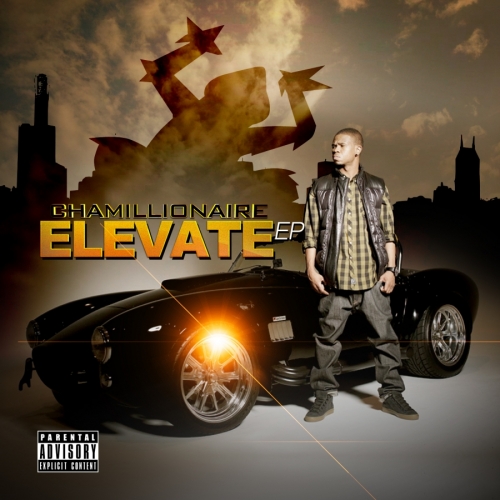 On February 12th, Chamillionaire will be releasing a new EP, Elevate, through his website. Above is the artwork, and below gives you more information on the album like how you can purchase a signed copy and a bunch of other stuff.

el·e·vate
/?el??v?t/
Verb
Raise or lift (something) up to a higher position.
Raise to a more important or impressive level:
I will be releasing a new EP called ELEVATE on FEB 12th on www.chamillionaire.com. The first 500 copies will be autographed and each autographed copy will be numbered. That means if you receive the 7th cd it will say 7/500 on it. There will ONLY be 500 autographed copies. I will only press up 1000 CDs total (Maybe I will make more later but if so I probably won’t make them available until later after the next one comes out). This way would make the amount of volume I have to ship easier for me to control. The CDs will ship on Monday February 11th and will release on Feb 12th. Elevate will have real songs on it and will probably have about 7 songs.
Everyone who pre – orders a physical copy will be emailed a download link at 2pm (Central Time) on Feb 12th. This means you will be able to listen to it at the exact moment it releases, before you receive your package in the mail, before All Star Weekend, and before someone else gets it and leaks it. That’s the best way I can ensure that the people who support get to hear it first.
The autographed copies will probably be sold out quick so I suggest you get one now if you prefer it be autographed. Sorry I will only be able to sign 500 a release. (Please don’t have a family member email me asking me to do anything different. It happens every time but this is already a lot of cds for me to autograph.)
This will be one of multiple EP’s that I will do leading up to the release of my POISON album. Each EP will be different from the last one and none of them will be a part of any continuing series. The packaging of each of these EP’s will be different than the packaging I normally do with my mix tapes. I explained that depth in this mornings chamillionaire.com newsletter, so if you haven’t read that email yet then you probably should go read it.
YOU CAN ORDER THE ELEVATE EP HERE: http://bit.ly/13IG9ag

Chamillionaire – End Of A Knife

Chamillionaire – I Know You See It