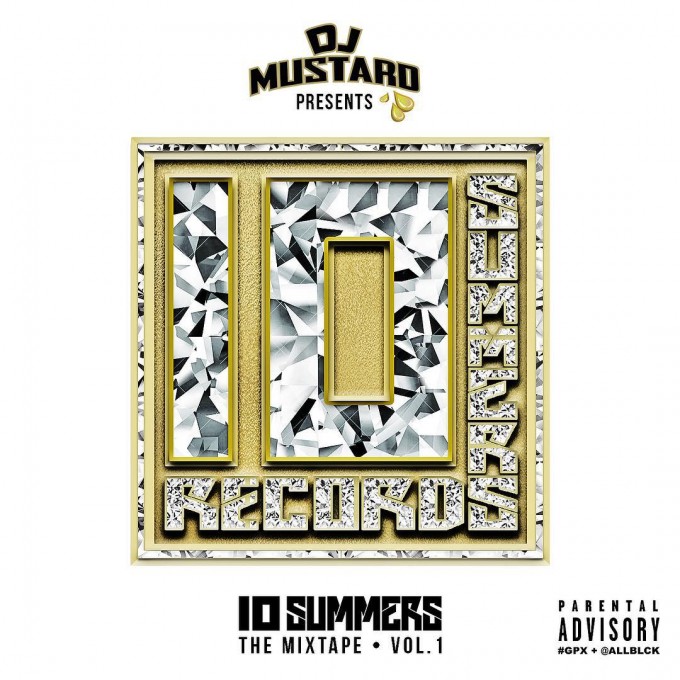 DJ Mustard has had a quiet 2015, especially compared to his domination of hip hop in 2014. With rap and R&B hits like ‘IDWFU,’ ‘2 On,’ ‘Or Nah,’ ‘Who Do You Love,’ ‘Don’t Tell ‘Em,’ ‘No Mediocre,’ and ‘You and Your Friends,’ for and featuring the biggest names in the genre, his lack of presence is noticeable in 2015. While his album is expected later this year, with a Chris Brown assisted single coming soon, Mustard has had little impact this year. While this is simply from working with artists who have not released the singles for their albums yet or failing to get placements on those albums, 10 Summer: The Mixtape Vol. 1 is his biggest venture this year thus far.

The mixtape is not a new sound for Mustard. It’s the same old Mustard we have all grown to love or hate. This works to his advantage when creating a familiar, catchy and cohesive sound, although sometimes it gets too cohesive and a little boring. The sound is perfect for summer, as is typical of most of Mustard’s production. The warm and sunny sound the records project make me feel as if I’m in Cali myself.

Songs like ‘All About You (feat. TeeFlii, Choice & Casey Veggies)’ and ‘Love (feat. Justine Skye)’ and to some degree ‘Ice Cream (feat. Dom Kennedy & Ty Dolla $ign)’ where Mustard slows it down to embrace his R&B side, get boring with the production and vocals being bland. Songs where Mustard embraces an uptempo beat like on ‘Shooters (feat. The Game, RJ, Skeme & Joe Moses),’ ‘Broke Boi (feat. Iamsu!, Choice & RJ),’ ‘Mr. Big Bank Budda (feat. DrakeO),’ and the majority of the song on the tape are more memorable. The exception is ‘Overdose (feat. TeeFlii, Iamsu! & Choice),’ a slow and sexy joint where Mustard tones down his hyphy sound for a smoother yet catchy R&B vibe.

10 Summers is clearly an attempt from Mustard to put on some developing artists that he is working with, and he does a good job of highlighting them and himself at the same time. Names that were unfamiliar to me RJ, Choice and DrakeO are on multiple tracks on the tape, often the highlights. Other West Coast artists that are not big in other parts of the country like TeeCee4800, Jay 305 and TeeFlii also make an appearance, while larger West Coast names like The Game, Casey Veggies, Ty Dolla $ign and Dom Kennedy make an appearance. This is clearly different than his 2014 album 10 Summers, which had a handful of nationally big stars like Lil Wayne, Big Sean, 2 Chainz and Wiz Khalifa among others.

While Mustard is likely saving these records for his upcoming album, the mixtape does not suffer from the lack of big names. The songs are catchy and full of energy and the artists feel right at home over the production. The majority of the songs find a balance between catchy and banging, not necessarily excelling at either but finding a middle ground that’ll appeal to listeners looking for either.

The tape brings nothing new, but rather plays it safe staying within Mustard’s and the artist’s comfort zones and playing to their strengths. Is there anything wrong with this? No, but it does detract from the level of music produced. 10 Summers has a few standout songs like ‘Shooters,’ ‘You Know It (feat. Nef The Pharaoh, Splacc & Big Mike),’ ‘Broke Boi,’ ‘Mr. Big Bank Budda,’ and ‘Overdose.’ Beyond those tracks, I can’t see myself revisiting much from this tape. Even with those songs, 10 Summers is not breaking any new ground. It’s a solid reintroduction for Mustard in 2015, but fails to leave anything memorable.