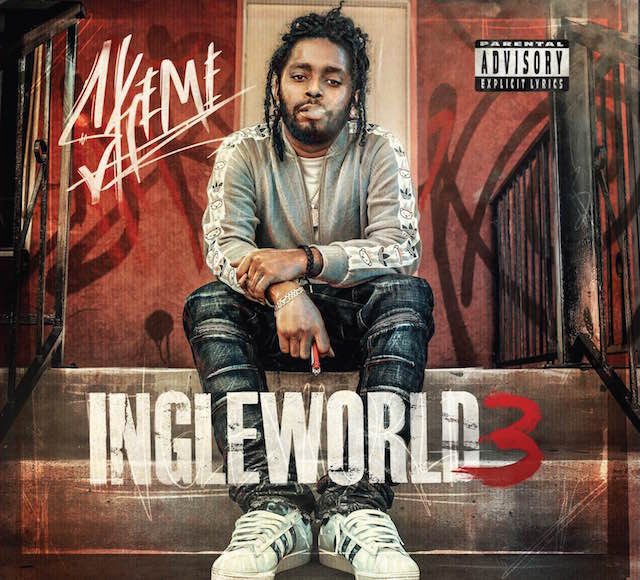 Gangsta rap has seen a sudden uptick in quality since YG released My Krazy Life last March. Freddie Gibbs & Madlib‘s extravagant collaboration Piñata was the crown jewel of the gangsta rap scene in 2014, and in 2015, Dr. Dre and The Game both made huge splashes with their acclaimed gangsta rap album (Compton and The Documentary 2, respectively). Likewise, a number of underground rappers from the southern California area, particularly members of YG‘s Pu$haz Ink label, have been making noise in the gangsta rap scene.

One of those underground rappers is Skeme, an Inglewood, CA native affiliated with Game‘s Blood Money Entertainment label. With Ingleworld 3, Skeme releases another gangsta mixtape that takes influences from some of the albums mentioned above, and also styles from Atlanta rap that he first brought to his music on Ingleworld 2, a mixtape released earlier this year.

These influences are clear and both help and hurt the quality of Ingleworld 3. Game, himself a former protege of Dr. Dre, took influence from Compton, and now his understudy Skeme has taken plenty of influence from his own project The Documentary 2 – including almost identical instrumentals on some tracks (“Go” resembles Game’s “Moment of Violence”‘s drum sequence). Instrumentally, these influences are detrimental. Most of the beats on this album sound very similar, almost to the point that the album feels like one long song spread over 14 individual tracks.

With his previous project, Skeme brought a notable dose of autotune to his voice, particularly on hooks. While I can enjoy autotune on certain rappers, with Skeme it flat out does not sound good. He is talented enough as a rapper that he does not need to drown his hooks in vocal effects. On some hooks such as “Reppin” and “Cake”, the vocal effects are so major that it is barely identifiable as Skeme (to make matters worse, on “Reppin”, he decides to ad-lib in background of the entire track). On “36 Oz”, he invites Chris Brown onto the hook, but also does autotuned singing on the hook again. Breezy sounds good on the hook and on the first verse, but Skeme‘s autotuned singing is yet again a turn off. He is also doing his verses in autotune on this song, something he did more extensively on Ingleworld 2 and again, something that is quite sonically unpleasing. When his hooks aren’t autotuned, they’re repetitive and corny, such as on “Cake” and on “Dirty” (a track that uses completely overused metaphors to discuss lean).

For every weak autotuned hook on the album, however, Skeme’s impressive flow and wordplay comes to display in some of his verses. The album’s opening track, “We Against The World Again”, is just two minutes of Skeme straight spitting. No, topically he is not very different from most gangsta rappers, but his descriptions of life in his hometown of Inglewood and his gang affiliation are not vapid like some of his collaborators on previous projects. When he is not autotuned, Skeme’s emotion comes out clearly in his voice, especially on tracks like the opening one.

Other highlights include “Go”, which features a killer appearance from T.I., and “The Realest”, which has one of the best instrumentals on the album, but in the end this is a frustrating project that lacks direction and still leaves me wondering what direction Skeme is taking his music in.

Favorite tracks: We Against The World Again, Go,  The Releast