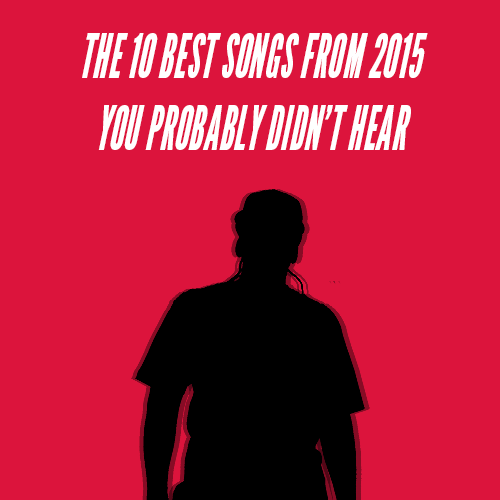 There’s just so much music flowing through these internets everyday that it’s impossible to catch everything but it’s our job to find the best of the best and save people like you less time trying to find dope music. As 2015 comes to a close, I want to highlight some incredible songs that didn’t get the proper attention. Most websites will be telling the most popular songs of the year, as if we didn’t already know these songs were cool while we’re going to give you some more incredible music to jam to and show your friends. Bounce, bounce, bounce, bounce. It’s all about the bounce, and producer BNJMN’s got it. He delivered this cuffing season anthem a couple months back and it’s been in my rotation ever since. It’s got all the elements of a great hip hop song. It has a unique, awesome beat, great, smooth verses and an incredible hook. Maurice Moore belts out a catchy hook like a youthful Chris Brown and really ties this whole track together with a beautiful bow atop the center. You need this song in your life. Daniel Caesar’s a Canada based singer with a virtuosic voice but there’s more to music than that. There’s a hundreds of thousands of great singers in this world and from watching a show like The Voice really helps you realize this. They feature all these great singers on the show but it’s rare that a singer from that show ever has much success in the music industry. The main reason because they don’t know how to write songs and Daniel Caesar has had that problem too but “Paradise” is a real breakthrough. The production help from BadBadNotGood is essential but the song’s led by the infectious melodies from Daniel. It’s a sign of great thing to come from him. Next up comes from soulful R&B duo abhi//dijon. This one’s a real gentle, raw song. The duo’s sound isn’t perfectly mastered and mixed but that’s done on purpose. Their sound is raw and on this one too, it feels like I’m sitting in a room hearing this song being performed live and acoustically. It’s an aesthetic that’s lost too often these days with all the technologies at our fingertips. Firstly, this song is so damn relatable. The song’s about a girl leading you on when she’s drunk but then not feeling the same way the next day. It’s a very real, relatable friend zone song and I this exact situation happened to me. Let me not delve too much into my experience but this heart wrenching song is just so beautiful on a sonic level as well. The song’s nicely produced by King Militia and Trevor’s autotune effects are used in perfect dosage. My list’s been pretty R&Bish to this point but this next song is traditionally hip hop. Ivan Ave’s an emcee from Norway, but he speaks English better than you and his rap with a better cadence than most the rappers you enjoy. This song’s such a chill, jazz-filled trip and Ivan Ave’s storytelling gives it even more life than it had without him. If you like Blu, you’ll like Ivan Ave.

Dave B – Worth It If you know me, you already know how much I love Seattle’s Dave B (pause). People always love to ask “who’s next”, or “who do you think’s gonna blow next?” and every time, I’m going to answer Dave B. His illustrious vocal styling allow him to traverse from rapping to singing, back to rapping, to harmonizing and whatever else goes on in a song of his with ease. He released his latest project Punch Drunk not too long ago and I knew I had to pick a song from it for this list. Problem being that there were too many damn songs to choose from and I had trouble deciding just one. Eventually, I came to pick “Worth It”, my favorite beat on the album and just overall great song. Keeping it in Seattle, let’s talk about this vocalist and producer duo MistaDC & Samurai Del. They dropped their first EP together just a couple weeks ago and I continue to urge more and more people to give them a chance. This song in particular, “Watermelon Candy” is an absolute gem. Led by a nice piano sequence, a driving drum beat and some other small production elements, MistaDC really steals the show here. A downfall of a lot singers can be their lack of holding the listeners attention in their verses as well as the hook. The hook has us tantalized but we;re still left with sweet sensations in between the hook. I really can’t say enough good things about this song and ONCE AGAIN, listen to the song. Please. Shifting gears a bit, lets propel away from these young acts and move to an underrated veteran. Deacon The Villain is one third of the underground rap act Cunninlynguists. They’ve been around since the early 2000s and they’ve amassed quite a loyal fanbase through the years to keep them safely afloat in this overcrowded music scene. This year, Deacon released his first completely solo album in which he produced himself. Included on the album is this QN5 cut which features both of his Cunninlynguist brethren as well as Tonedeff. Early on this year, a rapper named Tona released an album called Carpe Diem and while not nearly enough people got word of it, inside was a shining piece of art bare of fingerprints. Of all the tracks on the album, this Rich Kidd produced banger of sorts “Long Winded Road” really stood out to me above the rest. It’s a bouncy track pieced together with a sick, chopped up vocal sample, my musical fetish. I’m such a sucker for vocal samples and what Rich Kidd did with this one is divine. But of course, the raps don’t disappoint as Tona’s also assisted by fellow Canadian Adam Bomb on the microphone. Last but far is “Raw” from the Chicago native Smino. He and producer Monte Booker linked up not too long after Smino moved up to Chicago from St. Louis and they’re chemistry came together pretty quick. They’re rap’s version of Steph Curry an Klay Thompson, but right now they’re still very young and raw but the pieces are coming together more and more everyday. In fact, producer Stefan Ponce said the two “are going to be DJ Premier, Guru level. Drake and 40 level. They will be that legendary.” Of the songs they’ve released together, perhaps the most popular has been this one, “Raw”. It captures the essence of what they’re about as Monte Booker lays down a collection of perfectly blended synths and sounds and Smino flexes. What makes Smino special is his unique cadence and flow. No one’s rhyming like him. He’s got harmony in his verses yet it’s the furthest thing from corny. It’s only up for these two in 2016 so make sure you’re hip now.

Thanks for reading! Here’s a playlist of all the songs as well!