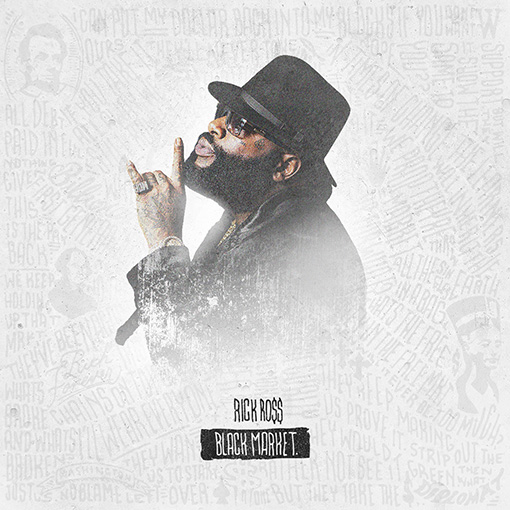 With it being over three full calendar years since Rick Ross‘ last consistent retail release (2012’s God Forgives, I Don’t), the Florida rapper needed to build off the strides he made with this summer’s Black Dollar mixtape. Ross dropped two albums in 2014 – the clumsily put together Mastermind and the far-too-cluttered Hood Billionaire – so two full-length projects the following year has come as a bit of surprise. Dollar cut down on the unnecessary features that his 2014 releases used, and managed to pack bangers, social commentaries, and a 7 minute track with The-Dream into a cohesive 17-track mixtape, so expectations were understandably high for Black Market.

At first glance, Market‘s tracklisting looks very similar to that of God Forgives – a largely Ross-centric first half of the record, followed by a plethora of R&B features on the latter half of the album. Lead single “Sorry” with Chris Brown is the best of these second half tracks, with a mellow production courtesy of Scott Storch complimenting a smooth appearance from Breezy. Mariah Carey makes a surprising appearance on the track “Can’t Say No”, a song that sounds like it should have landed on a Mariah album from the mid-2000’s. Mary J. Blige‘s appearance on “Very Best” is enjoyable, but drowned out by the heavy trumpets during the chorus itself, making it nearly impossible to hear. Meanwhile, “D.O.P.E.” with Future is a huge step down from Dollar‘s collaboration “Take Advantage”, with Future delivering one of his worst hooks in recent memory and Ross ad-libs as if he was playing peek-a-boo with a young child.

Where Black Market shines its finest is when Ross shines his finest. Opener “Free Enterprise” sees Ross rap straight for almost four minutes about his past and being misunderstood, and on “Smile Mama Smile”, he hooks up with Cee-Lo Green in a touching tribute to his mother. “One of Us” follows afterwards, and it is another electric collaboration between Ross and Nas, with the latter spitting one of his better guest verses in a while over one of the hardest instrumentals on the record. “Ghostwriter” has another great beat from D. Rich, with a string section in the background to compliment the simple drums, but Ross fits in a weak hook, an issue that flows throughout the album. “Dope Dick” wastes a great Jake One instrumental with Ross spitting some horrific bars about his, well, dope dick.

“Color Money” sees Ross take some weak shots at Drake relating to his beef with Ross-signee Meek Mill this summer, while DJ Premier hops on “Black Opium” to provide some scratches. Red Cafe provides what appears to be a phoned-in hook on “Peace Sign”, and the appropriately-titled “Silk Road” sees Ross ride over a very silky-smooth instrumental. A lot of the times throughout the record, the guests and beats – good or bad – take the attention away from Ross.

Rick Ross doesn’t stick to a standard sound despite keeping his subject matter the same, and that trend continues on Market. This project bears little resemblance to Dollar or even God Forgives, but is an enjoyable listen for Ross fans nonetheless.