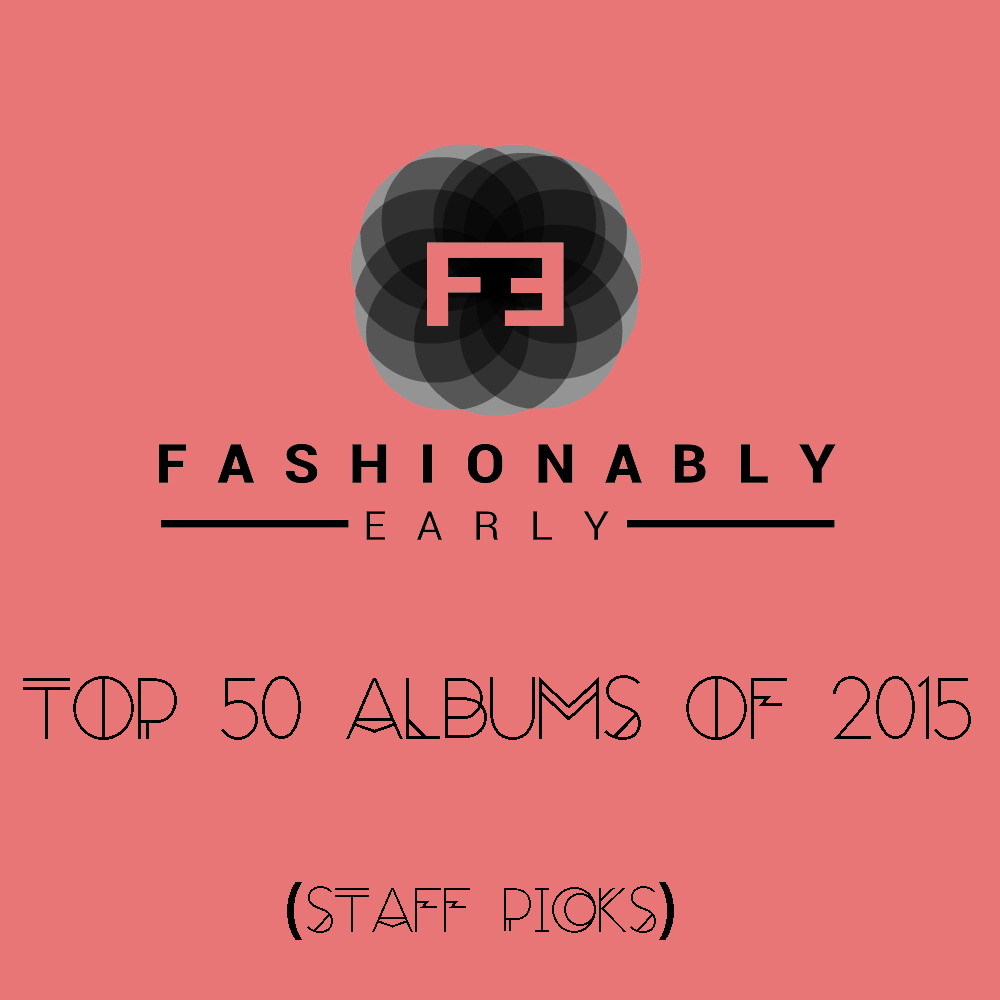 It’s that time of the year. 2015 was one of the best years in music in recent memory, and we have a list here that captures the best of the best for our readers. Our list is different from past years, which should gives you a better variety & an easier time digesting as opposed to going through multiple lists.*

On this list, there are purchase links if the project was a retail release, and a stream for every project regardless of its release strategy, making it easy for you to dig into albums while you’re reading or are interested in after reading.

Dig into Fashionably-Early’s Top 50 Albums of 2015 below, & please let us know your thoughts!

* The list was formulated using a combination of rankings from four different lists made by malbin, Trixx, Mitch, & Tommy. Ever since the success of Beyonce’s self-titled surprised album back in 2013, surprise albums and lack of pre-album promotion has become a hot mainstream commodity. Dr. Dre hopped on that wave this year and delivered his first album in 16 years. It’s not Detox but it was a nice piece of music to console the hungry fans that have been pining for Detox all these years. It’s not exactly the proper 3rd solo album from the legend, it’s more of a showcase of his artists and some other great talented musicians. Anderson .Paak and King Mez are two examples of artists who got big breaks off their features on this album and Anderson .Paak especially has hit the ground running since the release. Dre really has a knack for bringing the best out of his features and while Dre’s ghostwritten raps still sound kind of stale, with all the help he got throughout the album, it definitely has its highlights. And as always, you can count on the production being crisp and as clean as possible. While Dre doesn’t personally bring much to the table, he oversaw and put these talented people together. Making him one of the masters of executive production. – Trixx Pell fell onto my radar in early 2014, which led to him being featured on my “6 Of The Brightest New Artists In Hip Hop” piece mid-2014, which led into his first big, structured release, Floating While Dreaming. Not wasting much time, the charismatic New Orleans bred emcee dropped a follow-up in 2015 with more promotion, more investment but LIMBO is quite the logical follow-up despite the chain hill he’d been steadily climbing ever since. Pell’s a pop tailored rapper with a pretty solid singing voice and quite a songwriting mind. There are glimmers of a top 40 urban hit with songs like “Café Du Monde” and “The Wild” but that’s it, they’re just glimmers. The production on the album’s also pretty eclectic and that’s thanks in part to TV On The Radio’s Dave Sitek, who handled a lot of the album’s production. “Queso” for example sounds like a street corner pot banging, reggae tune while another song like “Almighty Dollar” is a pretty straightforward, hard-hitting hip hop tune. The album’s still proof that Pell is in a stage of constant growth that are sure to bloom with the help of a nice rainstorm. – Trixx The Maryland duo of abhi//Dijon made it onto our list with their project Stay Up with their unique brand of relatable, real, R&B sounds. In the age of overproduction, abhi//Dijon deny that route by instead delivering a more authentic sound. A sound that make me feel like the duo’s sitting in a large, sound bouncing room equipped with a laptop, a guitar and a pair of mediocre speakers. Forget the subwoofer because the lowest sound waves are the kick drums. And in this room, vocalist Dijon Duenas is earnestly laying his heart on that same table in front of them with the laptop and speakers on it. It’s a minimalistic display as even the room they’re performing is in the basement; it has no windows and not even a painting or picture on the wall. It’s just the world this album brings me in, which is an awesome, one-of-a-kind experience. – Trixx Shortly after the release of the first Slime Season, Thug was back with its predecessor. While not necessarily better or worse than the first installment, Slime Season 2 had some noticeable changes. First, around half of the project were new songs, a welcomed change from the first installment. Second, the project was a bit darker, instrumental-wise. While there were certainly bright production on Slime Season 2, overall, cuts like ‘Thief in the Night (feat. Trouble),’ ‘Pull Up on a Kid,’ and ‘Never Made Love (feat. Rich Homie Quan),’ contributed to a dark, slightly-atmospheric project. Like the first Slime Season, the project overall wasn’t as cohesive or tightly cut as Barter 6, but had plenty of good songs such as ‘Thief in the Night,’ ‘Hey, I’, ‘She Notice,’ and ‘My Baby.’ – Tommy After his last album (the feature-bloated Stoned Immaculate) didn’t go over too well, Curren$y took his time and returned in 2015 with the third installment of his famed Pilot Talk series. Linking up again with old friend Ski Beatz was the spark that Spitta needed as the beats on this record are some of the smoothest and most relaxing of the year. Cool & Dre also come out of the woodwork to provide a few beats on here including the ridiculously catchy “Pot Jar”, a song that showcases one of Curren$y‘s fastest flows in recent memory. Even Riff Raff pops up on here for a guest verse that’s actually really damn good. This is more of the same from Curren$y but his catchy style never really gets old. – Mitch