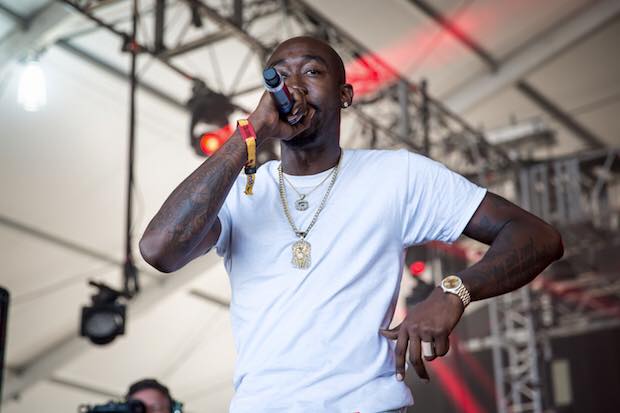 UPDATE 2: Freddie Gibbs has been released on bail pending a final decision on the extradition request by the Austrian authorities. Gibbs’ bail was set at $50,000 Euros, which is about $56,000 USD. Gibbs is set to get released from prison later today or tomorrow.

UPDATE: Freddie Gibbs’ extradition hearing that was scheduled for today was delayed until next Thursday (June 16) according to Malay Mail Online. Gibbs’ lawyers are seeking bail but their request will not be heard until next Tuesday. It’s not looking good for Gibbs.

Freddie Gibbs was arrested last night in Toulouse, France right before he was set to perform due to being connected to an alleged rape case in Austria from 2015. The news broke last night from a French newspaper and we have a translation below of the news article. This is not good news for Gibbs, as he will not only lose a ton of money canceling shows overseas and be stuck in prison overseas, but he will also be in some deep water if the allegations end up being true.

Gibbs cancelled a gig a week and a half ago in Austria, which makes this situation look worse.

Gibbs’ lawyer has made the following statement:

Freddie Gibbs adamantly denies the allegations that have been levied against Austrian authorities.

It makes you wonder why it took almost a year for Austrian officials to bring these charges.

Freddie will be fighting the extradition request as these are nothing more than trumped up charges. For any additional information please contact [email protected]

Read the report from a French newspaper below.

American rapper Freddie Gibbs, 33, who was to give a concert Thursday night at the Rex in Toulouse was arrested by the PJ few minutes before the show. He is suspected in a rape case committed in Austria.
From rap to rape (note, rape English) … He thought he was probably away and forgotten investigators. But Thursday night, the US rapper Freddie Gibbs, well known in the underground scene, was arrested by the men of the regional service of the judicial police in the heart of Toulouse.
Reportedly, he was wanted in connection with a European arrest warrant issued by Austria for a rape allegedly committed in 2015.
While he was announced as headliners at 20 pm in the auditorium of the avenue Honoré Serres, the artist has not had time to go on stage and for good reason. Minutes before he was picked by the policemen of the PJ, near the business area, as he arrived in Paris.
The rapper, 33, a native of Indiana in the United States, whose real name is Frederick Tipton, was immediately taken to the nearby central police station without going through the box Rex yet on the path.
Yesterday afternoon, after being heard, he was presented to the public prosecutor and imprisoned pending his extradition to Austria where the investigators, it seems, many questions to ask him. The investigating chamber is expected to rule in the coming days on its future. – SOURCE