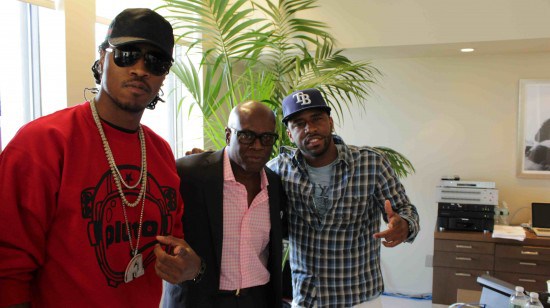 Problems are brewing between long time affiliates Rocko & Future. Rocko is suing Future for $10 million for a breach in a contract signed in 2011.

According to an official report, the contract entitled Rocko to 20% of Future‘s all-around earnings (endorsements, merchandise, publishing, royalties, touring, etc) and 25% of any advances he signed. Future inked a deal in 2012 with EPIC Records that has appeared to have Rocko’s label A1 Recordings involved (each of Future’s retail albums have been released under both EPIC & A1) but he is claiming that Future struck a side deal with the historic label and received a multi-million dollar advance.

Future has tweeted about these allegations and it doesn’t look like he’s really rocking with this. Rocko has to do this on the day DS2 was certified platinum? That’s not wavy.

Read Future‘s response about the lawsuit below.

Call them people & tellum u was jus playing Brodie..

Ion want my nigga lookin like no baby momma..

Real street nigga went to the court house,how did it feel when u signed the papers????????????

My dog gave a statement ?