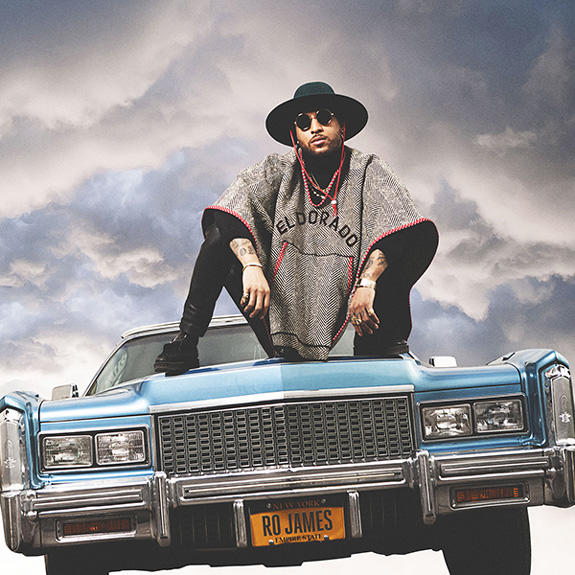 Ro James to many is a new name in the world of R&B. To some of us he’s the man who gave us three amazing EP’s back in 2013 and then disappeared. Ro has reemerged three years later since he blessed us with the Asher Roth backed “Lisa” with his full length debut Eldorado. For those that are familiar with Ro this album is the perfect follow up the trio of EP’s Jack, Coke, and Cadillac. For those that are new to him this is the perfect introduction. Ro James proves that he is not to be mistaken for some of the more well-known R&B acts out right now that may be getting all the radio play and blog love. Ro stays true to his sound of delivering that late 90’s/ early 00’s feeling R&B.

On the album’s lead single, the classic feeling and sounding “Permission,” Ro James shows that he’s able to craft a radio ready hit and still stay true to himself. The song is Ro in perfect form waxing over a very made-for-summer beat to that special woman that he’s chosen for the night while not sounding overly cheesy or out of place. Another highlight is the opener “The Ride.” For those that are familiar with Ro, “The Ride” will remind them of “We On”.  James again is executing perfectly the concept of hooking up with someone and hoping that the ride they go on together will drive him crazy.

The true highlight of the album definitely comes in the form of “A.D.I.D.A.S. (All Day I)”. Anybody can guess what the song is about as it follows in the footsteps of the countless other songs that share that title. The greatness of this song is that while following a cliché tried and true formula for a song with this title, Ro manages to avoid those same cliché, tried, and true pitfalls. Ro croons, over a very slow and string heavy beat, about having sex with that one special person that he can’t get his mind off of. This separates it from the rest of the album as you can tell that this is meant for that special person in your life and not person you took home from your Tinder date. This song immediately should be added to any and everybody’s baby making playlist.

Ro’s debut is not without its flaws though. Ro often stumbles at times when he tries to craft a song that one can tell is made directly for radio such as “Already Knew That”. While “Already Knew That” may have the catchiest (or most annoying) hook on the album it lacks the soul and heart that Ro’s best records have. The sequencing at times is another thing that holds the album back from reaching its full potential. For example, we go from the perfectly executed “A.D.I.D.A.S.” to a more remorseful and humble “Holy Water” to James telling a girl that he’ll treat her like his “Last Cigarette”.

Overall, this album is a very solid debut for someone who deserves the success that is finally coming to him. For those of us that have watched James from early on we are justified in our support and treated with a very solid complete debut. For those who are new to Ro James it’s a great introduction to one of R&B’s bad boys and rebels. Now here’s to hoping Ro capitalizes on this momentum and delivers us that sophomore set without another lengthy gap in between projects.

DeLa’s Final Thoughts: Very solid but at times lacking a true direction and understanding of itself.