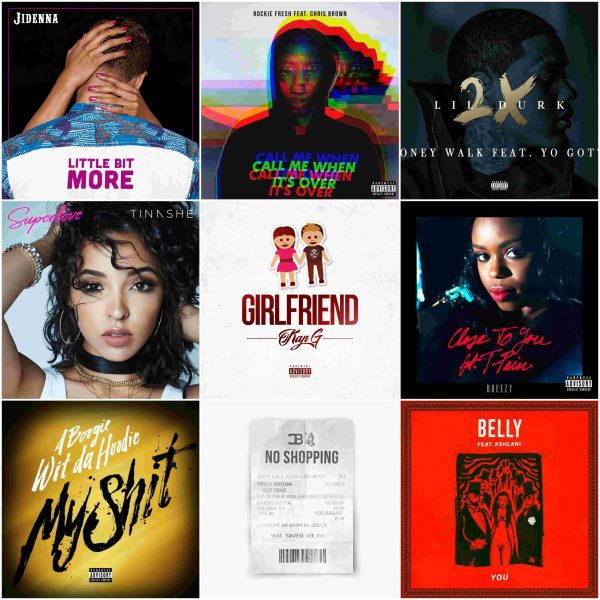 Always trying to keep our audience ahead of the game and stay true to our name, we have a hand-selected list of 20 songs that are bound to blow.

It is important to pay attention to the scope of these hits – not every one of these singles are going to be #1 hits. These will make up the next wave of breakout hits, career bests, regional hits, and potentially smash #1 singles on multiple formats.

Enjoy the list below, and be sure to check out the playlist of all the songs here or below.

Joey Badass has been steadily building his fanbase by releasing quality music and touring but now is the time for him to take the next step in his career. Joey’s release ‘Devastated’ is one of the rare ‘radio’ attempts in his discography but it still sounds like it fits his sound. The song features a booming hook, refreshing production, and respectable verses. Joey was recently announced as the latest iHeartRadio On The Verge artist, which guarantees ‘Devastated’ radio spins on iHeartRadio stations. The track is not even close to peaking but it is exploding on radio and streaming services, showing that ‘Devastated’ will go down as Joey’s biggest (and first) hit to date.

Lil Durk might have a crossover hit on his hands with ‘Money Walk’ featuring Yo Gotti. After previous singles ‘Like Me,’ ‘My Beyonce,’ & ‘She Just Wanna’ failed to pop off outside of urban channels (or at all for the latter), Durk abandons the rap/R&B crossover for a true street anthem. With a great early reception on radio and a buzzing #MoneyWalkChallenge happening, get ready for ‘Money Walk’ to pop off.

Following his first mainstream hit ‘Say It,’ Tory Lanez failed to have his followup single ‘LA Confidential’ stick. Tory and his team have to be relieved that his new single ‘LUV’ has stuck thus far and is making a case to become his biggest song yet. The song takes advantage of the industry’s love for dancehall as Tory interpolates Tanto Metro‘s ‘Everyone Falls in Love’ and does it masterfully. Don’t be surprised if you blink and ‘LUV’ becomes one of summers biggest hits.

The Game is always good for a crossover hit. His latest track ‘All Eyez’ features an infectious hook from Jeremih and a lot of over-the-top quotables from Game himself. From commenting on Desiigner & Future to yelling out Karrueche, the song has a lot of memorable elements to it. The song was just sent out to urban and rhythmic radio to great acclaim, you should keep ‘All Eyez’ on this one.

A Boogie Wit Da Hoodie dropped his viral hit ‘My Shit’ earlier this year and the song is really starting to pick up traction across all formats here in the heat of summer. The New York native recently inked a deal with Atlantic Records, so who knows where this record will go. All we know is that this song is bubbling and is about to turn into a bonafide nation wide smash. A remix from Fabolous sure doesn’t hurt his case.

Kamaiyah – How Does It Feel

Despite being released in 2015, Kamiyah‘s ‘How Does It Feel’ is about to take the stairs to the next level in the next few weeks. After inking a deal with Interscope and appearing on the hook of YG & Drake‘s latest collaboration, ‘How Does It Feel’ is getting a full label push as the song was pushed out to rhythmic and urban radio on July 12. The West Coast native is bringing that classic West sound to the game and we could not be more pleased with the end product. The rest of the world is about to be pleased as well.

Jidenna has released a handful of singles since his smash ‘Classic Man’ but there hasn’t been one that has stuck yet. His new single ‘Little Bit More’ sounds like the single that will. While the single doesn’t have the dancehall elements that many of the hit singles in the US have, it still gives off the same vibe. Jidenna‘s debut album is due out later this year and it looks like ‘Little Bit More’ is going to be the single that propels the release of the album.

Rockie Fresh – Call Me When It’s Over (Ft. Chris Brown)

Since signing to MMG, Rockie Fresh was relatively quiet aside from dropping a mixtape, an EP, and making a few appearances on Self Made Vol. 3. At the beginning of 2016, Rockie turned up the release schedule and dropped his debut single along with his debut retail project The Night I Went To. Rockie’s collaboration with Chris Brown ‘Call Me When It’s Over’ has every element to smash and it is beginning to bubble. The song is getting a lot of looks on primetime playlists on various streaming services and rhythmic radio stations are responding greatly to the song despite not being officially impacted yet. With a music video due out later this month, expect this song to get hot just as the summer ends. Congrats Rockie – looks like you got on.

ScHoolboy Q had the cookie cutter R&B track ‘Studio’ on his debut album Oxymoron and now his sophmore album Blank Face has ‘Overtime.’ The Miguel & Justine Skye assisted track was reportedly forced onto the album by his label but despite that normally being a terrible thing – the track is really great. The hook which is done by both Miguel & Kendrick Lamar (uncredited) is infectious and Q does a great job on his verses. Interscope would not force a song like this on an album for no reason. Get ready for this to get a full push and take over the end of summer into the fall.

The road to Tinashe‘s sophomore album Joyride has been a bumpy one. The album has seen a handful of unsuccessful singles along with the album’s former title track being given to Rihanna for a future album. The talented artist hit the reset button and is now back with her new single ‘Superlove.’ The track was produced by The-Dream & Tricky Stewart and has a nostalgic pop feel to it. With a full radio push expected, this song might be Tinashe‘s biggest track to date thanks to it’s pop elements. Given Dream & Tricky’s track record, I think this track will perform better than most people are expecting. Don’t count Tinashe out.

CONTINUE TO NEXT PAGE