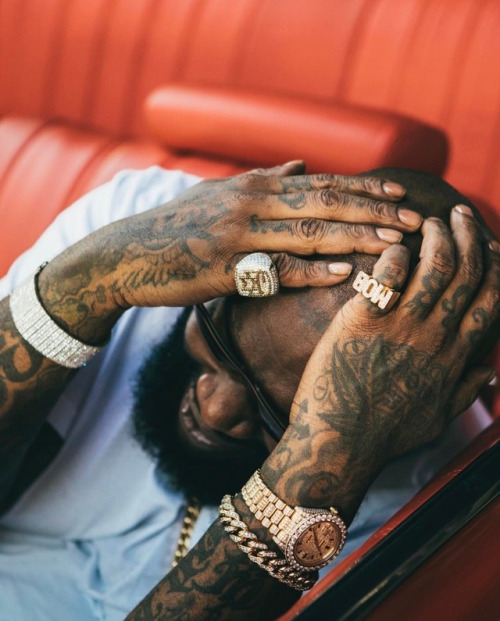 Like it or not, Rick Ross is one of the most important hip-hop artists of the past decade. The Miami rapper is preparing to release his ninth studio album Rather You Than Me and before that, we have ranked Rick Ross‘ discography. The albums are listed from worst to best and to be clear: Rick Ross does not have a “bad” album. For the record, this list only consists of studio albums, so Rich Forever is not included on here. If it was, it would have ended up as a top two Rick Ross project.

Dig into the list and revisit some of these classics before Rather You Than Me drops.

Rick Ross‘ second album Trilla saw two of the most successful singles of his career with the T-Pain-featuring “The Boss” and the Nelly collaboration “Here I Am”, but the album itself is rather inconsistent. Lots of pop hooks and soft beats litter the first two-thirds of the album and don’t allow Ross and his rugged style to shine. As the album nears its end, however, beats makers including J.U.S.T.I.C.E. League, DJ Toomp, and Drumma Boy pop up for a collection of some of Ross’ best bangers. “This Me” is an essential song for Rick Ross fans, and one of many Jay-Z collaborations is on Trilla (the excellent “Maybach Music”). – Mitch

The beginning of Rick Ross started with Port of Miami. Released in 2006 behind massive singles ‘Hustlin’ and ‘Push It,’ Port of Miami introduced the world to Miami’s latest rap star. The album is laced with coke-filled bars and hard-hitting, synth-heavy production that propels Ross’ cinematic persona to another level. It is safe to say that this production needed a heavy, menacing voice like Rozay’s to really shine. The Akon-assisted ‘Cross That Line’ is an easy standout along with the ‘Hustlin’ remix with JAY Z & Jeezy, ‘I’m A G’ with Lil Wayne & Brisco, and R&B collaborations with Lloyd, Lyfe Jennings, & Mario Winans.

The album stretches to almost 80 minutes, which is a lot to take in. Just like every album in his discography, there are some duds on here. Despite that, Port of Miami gave Miami a new rapper to get behind and Ross’ performance foreshadowed his future standing in the game. – malbin

Rick Ross gave fans eight months to breathe after his masterful Mastermind album (which we’ll get to here shortly) before he took us back to the trap with Hood Billionaire. The late 2014 release feels and plays more like a mixtape rather than a retail album. Attempted singles “Elvis Presley Blvd.”, “Keep Doin’ That (Rich Bitch)” and “Nickel Rock” still fit the menacing tone of the album and may explain the lack of their success (beyond the obvious under-promotion from Def Jam). The album was pounded by critics but a quick revisit proves that critics really did not fully digest this album, have an agenda against Ross, or are not made to listen to this type of music.

Hood Billionaire is filled skits containing phone conversations with prison inmates and really help set the tone of the album. Rozay publicly revealed that he was heavily inspired by Memphis on this album and that should have went without saying. The deep 808s and mesmerizing bass lean more towards the home of Yo Gotti than Atlanta or his rich Miami soundscapes of previous projects. ‘Neighborhood Drug Dealer’ may honestly end up being a top ten Rozay banger (and this man has MANY!) and other bangers such as the Boosie Badazz assisted ‘Nickel Rock’ and the album’s title track leave fans with more heaters. Rozay also brings out his soulful, elegant side with the Big KRIT assisted ‘Brimstone’ and ‘Quintessential’ which featured Snoop Dogg‘s best showing in literally years. The JAY Z feature on ‘Movin Bass’ disappointed fans due to Hov only saying about four bars on the chorus but the track itself was still a solid performance.

Sure, Hood Billionaire had a handful of the usual duds on it. This is not being claimed as a top-of-the-line Rick Ross album. This album is comparable to Memphis Grizzlies great Zach Randolph. You know what you are getting yourself into here: a consistent showing that rarely disappoints. – malbin

For his last album with Def Jam Recordings, Ross went for a more relaxed and R&B-flavored record, but it still ends up as a strong album. With only two rap features (Nas and Future), Black Market sees Ross go more personal than most of his previous albums, as well as a little lighter on the drug talk. There are songs for his mother and his family, his hometown, and his struggles and triumphs. Ross is accompanied with lots of smooth, R&B-suited production throughout the album (including an unlikely but successful collaboration with Mariah Carey and J.R. Rotem). For those looking for Ross’ softer side, this is the album to check out. – Mitch

With God Forgives, I Don’t, Rick Ross had the task of following up his most commercially and critically successful record Teflon Don. With a far more varied cast of contributors, strong selection of singles, and an excellent original mixtape (Rich Forever) as promotion, God Forgives, I Don’t came with high expectations – and it delivered. The all-star cast of “Three Kings” – verses from Jay-Z and Dr. Dre and a beat from Jake One is as good as expected, and the eight minute opus “Sixteen” with Andre 3000 is as good as you could hope for. Ross is at his finest as a rapper on this album, with strong flows and wordplay throughout. Even with a few duds towards the end of the record, stick around for the fantastic bonus track “Triple Beam Dreams” and its killer Nas feature. – Mitch

We had to wait nearly two years for Rick Ross to follow-up God Forgives, I Don’t with Mastermind but man, it was worth the wait. Rozay went through a few rough patches leading up to the release of this album: there was an attempted drive-by shooting on Ross’ 37th birthday, he lost his endorsement deal with Reebok over lyrics in his ‘U.O.E.N.O.’ verse and he failed to get a radio single to stick leading up to the album. All of that helped Rozay create one of his top albums.

Mastermind features absolutely gorgeous production that may be the most luxurious of his career. The album features a masterful JAY Z collaboration on ‘The Devil Is A Lie,’ a reconcile with long-time rival Jeezy on the menacing ‘War Ready’ and uberly motivating ‘Nobody’ featuring French Montana and godly skits from Diddy. It’d be a crime if ‘Sanctified’ with Big Sean & Kanye West or the elegant Scott Storch-produced ‘Supreme’ were not mentioned. The album’s final four tracks which feature The Weeknd, Big Sean, Kanye West, Lil Wayne, & Meek Mill are all near-perfect collaborations and a supreme way to cap this work off.

The 16 song album (19 tracks are featured on the deluxe) is a bit bloated in the middle but those are still really solid cuts. This is the beginning of the MUST LISTEN Rozay albums. If you skip over this one, you miss prime Rozay in excellent form. – malbin

During the production of Deeper Than Rap, Rick Ross was involved in a feud with 50 Cent, who had revealed Ross’ prior career as a correctional officer. Rather than laying back and making an album of apology notes, Ross came furious and energized, throwing shots at 50 Cent all throughout Deeper Than Rap and coming with some of his most intricate drug-dealing stories of his career. Executing glossy production far better than his first two albums, Ross grabbed some of J.U.S.T.I.C.E. League‘s best-ever beats, as well as stellar guest appearances from the likes of Nas, Kanye West & Lil Wayne for a surprisingly impressive listen after two non-cohesive records (Port of Miami & Trilla). A must-have for Rick Ross fans, Deeper than Rap is a combination of Ross’ greatest braggadocio and some of his craftiest wordplay. – Mitch

There should be no surprises here: Teflon Don is Rick Ross‘ magnum opus. From Ross’ evocative lyrical content and pristine delivery to the sumptuous production, the album is covered with pure opulence. Each song outside of the album’s opener has at least one feature and every guest leaves an appreciable impression on the listener, especially JAY Z, Cee-Lo Green, Kanye West, & Drake with their respective showings. The album bobs and weaves through Rick Ross‘ versatile musical palette, effortlessly shifting from trunk-rattling street anthems (‘B.M.F’, ‘I’m Not A Star’ & ‘I’m Not A Star’) to elegant R&B cuts (‘Super High’ & ‘Aston Martin Music’) to songs that make you envision and thrust towards the finish line of your goals (‘Free Mason’, ‘Tears Of Joy’, ‘Live Fast, Die Young’, and ‘Maybach Music III’).

As with every Rick Ross album, the production on Teflon Don is immaculate. Teflon Don has the biggest boss at his peak. It will be really hard for Rick Ross to top Teflon Don and it is fine if he doesn’t. If Teflon Don, one of the best and most important albums of the 2010s, goes down as Ross’ best album, that’s one hell of an accomplishment. – malbin