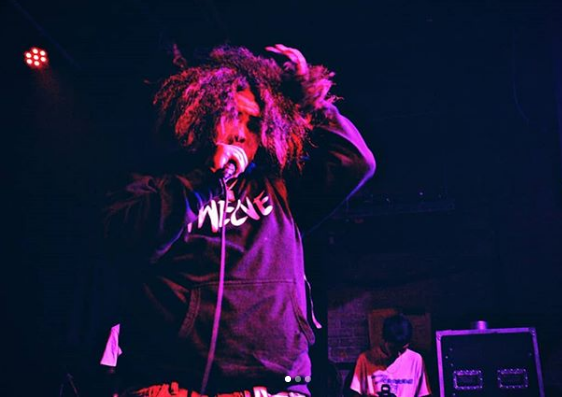 A certified future superstar, Texas’ very own SADFACETHUGGIN is sprinting towards the top like there’s nothing in his way. Riding high from the successful release of his debut EP SadFace and a Beats 1 Radio premiere of only his third official release, Thuggin is truly wasting no time in spreading his name like wildfire. Expanding on the emo-rap sound that is quickly beginning to dominate the headphones of many listeners, SADFACETHUGGIN provides something both new and familiar across his tape’s four tracks that’ll be sure to draw you in and keep you there. Showing no fear of slowing down anytime soon and with the backing of his team at PitchBlackTheLabel, there truly is no stopping this exciting young artist.

So you grew up in Abilene, Texas. How does that affect the kind of music you make?

I mean growing up in a small, violent city like Abilene you just gotta grow up with ya eyes open. You have to grow up early out there cuz shit gets real.

If you had three word to describe your sound, what would they be?

What do you think sets you apart as an artist?

I’m not gonna tell people I’m different, everyone says they’re different and they’re all the same. I let my voice show who I am and let people see my differences for their own.

The lead single to your EP, “Fuck Luv”, was premiered on Zane Lowe’s Beats 1 Radio show, how did that come about and what does it mean to you?

My team (Pitch Black) reached out to Apple Music and Zane Lowe. Their team responded back out saying that “Fuck Luv” was a great record and that they would love to premiere it. And I think it’s fucking great. Just the fact that Zane Lowe played my shit back six times means a lot.

What’s the Dallas rap scene looking like? It really seems to buzzing with guys like you working, but I want to know more from an insider perspective.

Dallas is cooking up in a pot. Too many people out here stepping on necks. Dallas on its way to be the next big city for music. Mark my words. Artists like GwapMizzle, FlexinFab, Yeroc, Emotional Xan could really blow up any second and shit gon get REAL.

You wear the XXXTENTACION influence on your sleeve, so I’m kind of interested in how important he and his music were on you and your sound?

Jahseh means a lot to not just me, but to the world. It’s sad he will never know how much he changed the world. If it wasn’t for X, there would be no SADFACETHUGGIN.

What do you have planned for the post-SadFace world that you find yourself in now?

Who Is SadFaceThuggin ? Coming soon. Before the end of the year, be on the lookout!!!