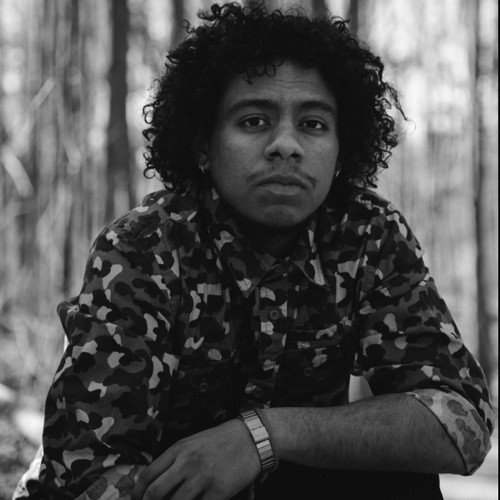 Not too far outside of Boston lies the city of Lawrence. A town, still consistent with the New England stereotypes. Hailing from this city is one of the most talented young artists out. His name is Anjelihs and despite his Little Richard-esque pencil beard, he’ll let you in when you come knock knockin’. In fact, he let us in on a whole bundle of information and we’re hear to share that with you. I’m willing to share what we learned so sit, down, grab a cup of joe and learn about one of the most promising young artists in our first edition of the newly erected Artist Spotlight series.

So, Anjelihs is the name i created when i put together my first and middle name.

So, you’ve got 5 songs on Souncloud thus far. Are these the first you’ve released to the world? How long have you been making your own music?

Under Anjelihs, yes. For years i’ve been releasing music under different names but I took down the majority of the music off the net cause I wanted to take a completely different approach. I only want my best songs up on the net. I feel like if people listen to my old shit and it doesn’t sound as dope as my newer songs, they’d be quick to judge me. I’ve been writing my own music since I was like 11 years old. Started releasing music when I was about 18. Around that time I was writing raps.

Who would you say is your biggest musical influence?

Right now, I would have to say TDE, Odd Future and Kanye West are always playing on my iTunes.

You seem prepared to really take the music scene by storm. Reveal to me a little bit of how you’re going to do it. What’s in store for your debut project?

Well, as long as I keep learning from the artists that inspire me and keep feeding my curiosity, then I’ll keep creating dope songs. Right now I’m wrapping up my project and a video for Good Vibrations. I’m planning on releasing both very soon. I feel like it’s time to share more now my music is bubbling.

Anyone particularly notable that you’ve been working with?

I’m in ATL now working with Russ from Diemon. He produced a few songs that’ll be on the project.

So, I think you know what comes with the life of being, well, an R&B singer. You’ve even got the phrase “Get Ya Panties” wet on your SoundCloud. Are you prepared for the pussy that will be thrown at you left and right? Does the idea of being famous excite you?

Haha that would be crazy. and fun. But I don’t like the idea of being famous [because] i’m so low-key and i love my space.

So you mentioned that you rap too. What are your thoughts on Drake? Will we see you do both on occasion or is it strictly singing?

Drake’s “So Far Gone” album was a game changer. Definitely inspired me to rap and sing on the same beat but I ain’t on that anymore. Singing is my thing.

I’ve heard someone compare your sound to The Weekend. Would you call that a fair assessment?

I never know what to say when I get compared to him because I don’t even know any of his songs, BUUUTTT people do compare both of us to Michael Jackson so i can see why people would say that.

If I ain’t making music, I’m visiting blogs or working. I work a full time job and I can’t wait to quit. Oh, and I like to direct videos and work on art covers from time to time.

So when you’re able to quit your job, you’ve gotta walk outta there like a boss right? How are you gonna make sure the whole building knows you just quit?

Haha, I’m the type to just never show up again. F*ck that. Or I’ll completely stop caring and get fired.

Do you play any instruments?

Not yet but i’m getting an electric guitar soon.

Really dope. Alright so I think it’s about time I let ya go. Before I let you go though, when can we expect this debut project?

Just know that right now, at this moment i wanna release it before 2015.