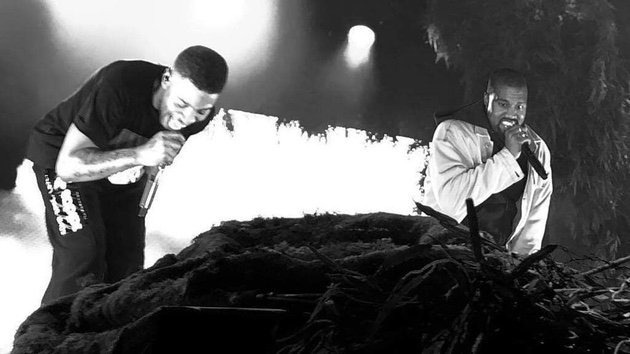 Last night was a crazy night in Chicago. Fake Shore Drive celebrated their ten year anniversary with a reunion of the Big Tymers, along with Tee Grizzley, Twista, The Cool Kids, G Herbo, King Louie, Femdot, & others. Not too far from that show was Kid Cudi‘s stop on his Passion, Pain & Demon Slayin tour. To the surprise of nearly everyone, Cudi brought out Kanye West to perform ‘Father Stretch My Hands’. This was Kanye’s first public performance since his series of meltdowns which led to him cancelling his tour to go to a mental hospital. Kanye reportedly flew out to Chicago just for this show, so you know that the love between the two has been restored.

Last year, Cudi went on a verbal rage against Kanye West before he went to rehab. To two reconciled and were reportedly recording music out in Japan earlier this year and there are rumors that the two will release an album on December 31st this year. Those are some high hopes but I would not be mad if that was the case.