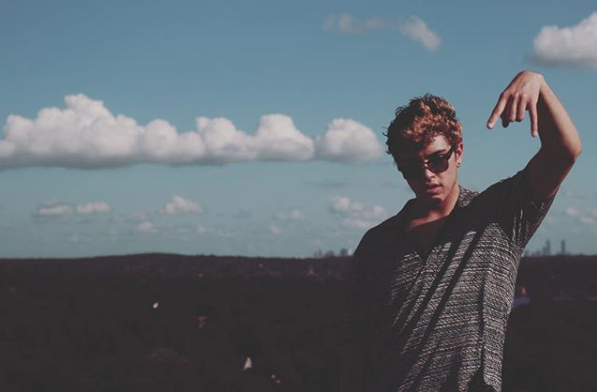 What can I say about YOUNGFACE? Dedicated, passionate and talented, YOUNGFACE is a fresh artist working to build a name for himself through the release of sleeper hits like, “bifld” and “Ocean”. With a melodic approach to music, he is able to craft songs that get caught up in your head for days, making it impossible to forget about this buzzing artist. Balancing trap-esque vocals with heartfelt lyricism, YOUNGFACE truly brings himself into every song and makes it something that only he could’ve done. He’s putting out his new single “dontwasteyourtime.” tomorrow so let us introduce you before that song blows up.

Check out our interview below to get familiar right now.

Can you tell us a little about YOUNGFACE?

I’m 21 years old from Woburn, MA (a little city outside of Boston). My mom was a teacher and my dad did all sorts of shit. They met in Guatemala working with street kids, and he was born down there, so when I was born we spoke Spanish in the house. We originally lived in a little apartment in Waltham, MA, but my mom got pregnant with my brother when I was 4, so we got a house with a huge yard. I was probably one of the youngest kids in the neighborhood and other kids parents (give or take a few) fucking sucked, so I was always the one to take the most shit. Looking back though, I feel bad for those kids ‘cause some of them were pretty neglected. When I was 5, one kid let me try his old skateboard and taught me how to acid drop off a curb. I thought that was tight as fuck and I saved $10 and got a shitty skateboard from Target, it had plastic wheels and I put fucking holes in them from riding so much. I went through like seven of those Target boards.

My boy Andy (s/o Andy) helped me a fuck ton with all this music stuff and staying organized. He has some older sisters who would babysit me and they let me try a real board for the first time when I was around eight. By that point I could ollie and shit, so they put in the word to my mom to let me get a real board. For my birthday that year, my mom and aunt threw down together and gave me my first real board, that was when I got obsessed. Andy’s older sisters would always listen to Green Day, Panic! and Fall Out Boy, and I used to play Tony Hawk games on PS2 with him, so that introduced me to a lot of bands. I wanted to be in a rock band and started playing guitar but my mom had a brain injury when I was 9 and she couldn’t keep taking me to lessons.

At that point I had learned some Green Day songs and I’d rearrange the chords and wrote some little song. That was when I first started fucking with music. It was one of those things you didn’t need to go anywhere for or have an organized schedule, you could just plop down with a guitar and write some shit. Same thing with skateboarding (and eventually BMX).

How did you develop your style?

Just listening to a ton of different shit honestly. I listened to a lot of the oldies radio station when I was in the car with my mom because she didn’t like the rap station and I didn’t like her soft rock, so it was a happy medium. I had a bunch of Elvis records and knew all the words to his hits. “My Life” by Billy Joel was always a dope song for me ‘cause it was the first, “fuck you ima do me,” type song I heard. Then I started to get into the punk stuff and that was feeding a lot off that energy.

When I was in 6th grade, I was really into a bunch of stuff kinda all over the board: System Of A Down, MCR, Slipknot, Relient K. I was into all the different guitar sounds in the music. I started getting into MGMT, Passion Pit and Phoenix about a year after that and I started really fucking with electronic indie-pop type shit. It wasn’t ‘til Freshman year of high school when I started listening to some of the first Skrillex music and thought to myself, “how the fuck did he make this?” A couple hundred youtube tutorials later and I was testing out the EDM waters.

At that point my boy Phil had made a rap that got some clout on Twitter and quickly someone made this trash diss rap, so I sent shots back in a super half assed track I made in a few mins. I rapped on it with a Tyler, The Creator voice and it was ignorant as fuck. The next day at school, kids were kinda fucking with it so I made a 3005 remix, and like, one other track before I stopped rapping. Just one of those things I was doing ‘cause it was fun but I didn’t take it seriously or think it was gonna pop.

I did pretty okay in school and fucking slapped my SATs so I got into a good college. My second year I tried to start an emo band like I always wanted to, but we were so bad and it fucked me up ‘cause I was putting so much time and effort into it. Around that time, “Look At Me!” started blowing up and I thought the distortion and DIY sound was nuts. I started making some beats in my free time from the band and recorded a ton of raps that I just sat on. Finally my homie Warren convinced me to start recording and we would hit the studio like everyday and grind on it. I put out a song with Warren and kids from both my college and hometown started playing it at parties. Having people respond to shit I was making was such a crazy feeling ‘cause I’d been making shit for so long and never had anyone actually fuck with it. Having an audience made me think way harder about the shit I was making and really made me want to start making my music special, something that withstands the test of time.

Another big change is I’ve just been trying to really dig into myself and my emotions a lot more with my lyrics. It was really hard for me to open up in songs and I’d just rap about money and luxury shit that I wanted ‘cause money was kind of an issue growing up. All my friends would link up and they’d want to get food, but I couldn’t really afford to drop bills on shit like that. If I went to Chipotle twice in a week my mom would would lose it (rightfully so). I liked saving my money for things i really cared about like music, BMX, whatever. I still wanna be able to one day get coffee in the morning without having to worry if I’ll be able to pay rent haha.

Where does the name YOUNGFACE come from?

I mean, honestly I didn’t hit puberty hard ‘til I was almost 17. Kids in my grade had fucking beards, meanwhile I was chubby and had a lil baby face. This girl in my art class when I was a Freshman in high school told me that when I was older, girls would go dumb for the baby face. I was pretty fat ‘til I was 17 though, but then Senior year I lost it all and watched girls who wouldn’t give me the time of day before start hitting me up out of nowhere which was funny. Losing weight was dope ‘cause I got to see how fake people are and how quick they can switch up, but fuck ‘em. Keep your circle tight, real recognize real ya dig.

Anyways, I came up with it in my dorm room after smoking with my bro Bmac about a year and a half ago. He knew I had started fucking around with some raps and he was in my old band so we’d throw ideas at each other and I was like, “yo, what do you think of YOUNGFACE as a rap name. All caps, no space”. It just looked sick typed out and the all caps just made it dope. When I first got on Spotify, they didn’t have it all caps and that was a huge deal for me but it’s good now. It might still be weird on Apple Music.

What’s your favorite song that you’ve made?

Most of my favorite songs I’ve made are unreleased, but I really fuck with “Ghosting”. That shit smacks so nice in a car, plus the lyrics were some of the first I started to touch my emotions with. Like that hook, “it’s late and I’m lonely, she mad that she know me, ‘cause I’m always ghosting, I’m always ghosting…”. I have really bad anxiety and I feel really fucking guilty for stuff easily, so anytime I’d start to try and go to sleep, I’d keep myself up. I’d just start getting guilty as fuck for talking to girls then dipping on them ‘cause I wasn’t with it for whatever reason. I have this weird fear that everyone wants to fuck me over. I think it stems from a lot of dumb personal shit, but oh well. One day I’ll get the bag and be able to afford a therapist. For now, music is the priority.

Lately I’ve been really fucking with alternative artists like Lil Zubin and Vito, but also some hard shit like Babyface Kaedo or Plad Fine$$e from here in Boston. I also listen to mikefellow of course. He’s my brother in this shit and I’m always mixing or recording with him. Dude played a huge role in helping me start getting real in my lyrics cause he’s been at this shit forever.

If you had to do anything else besides make music, what would you do?

I don’t know, but I’d have to be doing something creative. The way I see it, I’m not good with just being a worker ‘cause when I’m dead I want to have left something behind and made a significant mark, plus I just need to be creating stuff or making art somehow. I don’t know. It sounds corny, but fuck it. I really wanted to do film, and I applied and got into the film program at Emerson College but didn’t have the funds. I feel like it’s something you just gotta work at, though. I want to start making my own music videos at some point. I’ve played a hand in most ‘cause I’m a control freak and I love visuals, but at some point I really want to be the one in charge. If not making videos, being a tattoo artist could be sweet. I love tattoos. I’m gonna get a bunch when I start getting money.