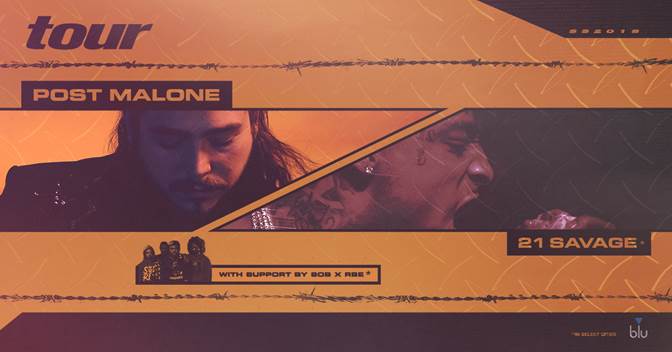 So “Rockstar”, the hit song from Post Malone and 21 Savage is finally seeing its drop off so it’s time for him to start making the next moves, but they’re still not letting “Rockstar” completely fade. Post Malone will be kicking off a new tour on April 26th with support from 21 Savage as well as SOB x RBE and 300 Entertainment’s newest signing Paris. Also, if you order a pair of tickets to this tour, you will be gifted with a physical copy of Post’s forthcoming album Beer Bongs & Bentleys. So it’s confirmed that the album will be coming in the next two months., before this tour begins. And in even more exciting news, the next single from the album, “Psycho” featuring Ty Dolla $ign will be released this Friday. It’s officially Post season.

Tickets go on sale this Friday and you can purchase them HERE when they’re made available. Also we have the full list of dates below.