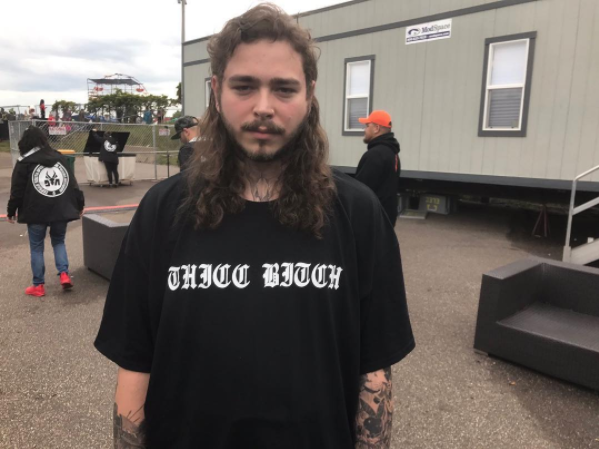 Post Malone dropped his debut album Stoney back in 2016 but 2017 has truly been his pinnacle year so far in his young career. He saw Stoney gain massive traction and he gained his first #1 hit with his new single “Rockstar”. Post’s still at the top of the charts and he really couldn’t be much hotter yet he’s being a pretty normal guy and just indulging in the greatest things in life, Call of Duty and beer. Rolling Stone caught up with Post on a typical day at his Los Angeles home and made him take a break from playing the new Call of Duty. In the interview he talks about his gun collection, Justin Bieber, his new album and plenty.

In reference to his new album, Post said, “I’m trying to push the genre”. That quote seems pretty accurate based on some of the features he revealed which includes, Tommy Lee, Nicki Minaj, Ty Dolla $ign and John Mayer. There’s no word on when the album’s due to come out but it’s a good bet that it’s slated for the first quarter of 2018. Head here to read the full interview.

There was some interesting commentary included about his former tourmate and friend Justin Bieber. He calls Bieber “‘a fucking awesome, great dude’ and ‘a genuine friend.’ He adds, ‘He’s gotten super-religious recently. Real culty.’ He’s referring to Hillsong, a megachurch that Bieber belongs to. ‘It’s not culty!’ Ashlen (Malone’s friend) interjects. ‘It’s a total cult,’ Malone continues. ‘He’s already given them, like, $10 million. Those are the worst kinds of people. I used to be super-religious. I believed in God. But now I see through it. It’s nice to support something you believe in, I guess, but people are spending so much money, and God doesn’t care that your church has a fucking gold roof.’ I ask if he’s shared these thoughts with Bieber. “We don’t talk about this stuff,’ he says.”