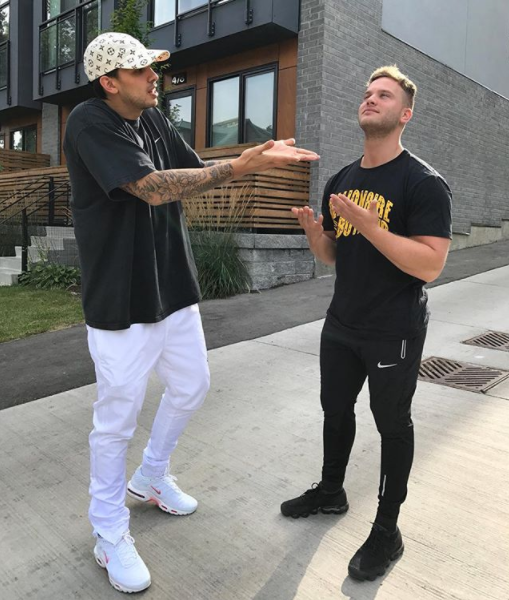 It’s a known thing that we predict trends before they even happen and we’ve got another future trend alert here. This artist 3030 from Toronto is bound to make some big noise. Their Soundcloud is very basic and ambiguous. They’ve got a few songs up there but no pictures, no social media accounts, no nothing. Behind the music though is two guys from Toronto; Zack Skywalker and Levi Bent-Lee. Levi’s already got a pretty big fanbase without the music. He’s a pretty decent social media star with over 100,000 followers on Instagram and 36k subscribers on Youtube. Probably most notably though he and his brother Kai own the Toronto restaurant Frings. Not only is Drake a fan of the restaurant and a friend but he shouted them out on “30 for 30 freestyle”. The other member of the duo, Zack Skywalker’s a little less known but he too has a significant following on Instagram. And not to mention, Levi’s father is actually Susur Lee, famous Food Network chef.

Ultimately they’re very good friends and they’ve been making music together, music that’s actually surprisingly really good and they’ve just begun releasing it over the past week. So not only do they have the sound down pat but they’ve got connections in Toronto and most importantly connections to the city’s biggest and most powerful figure, Drake. Even without an official Drake cosign there’s bands of people that will flock to check out an artists music if they think it might be affiliated with him.

They’ve got 5 songs up on Soundcloud so far and they’ve dropped them all within the past week. Quite frankly, each one of these songs is a jam. The potential for them is apparent and they’ve really got a good grip on that autotune R&B sound. Definitely check them out and remember who told you first.